Zak Salih is the author of the new novel Let's Get Back to the Party. His work has appeared in a variety of publications, including Foglifter and Epiphany. He lives in Washington, D.C.

Q: What inspired you to write Let's Get Back to the Party, and how did you create your characters Sebastian and Oscar?

A: I wanted to capture a pair of (admittedly numerous) experiences of being gay in this particular moment in history, as part of a generation that escaped the brunt of the AIDS plague but also didn’t grow up enjoying the increased visibility and social acceptance.

I’ve often thought of this novel as a story not about “coming out” but about “coming into” a community. My aim with making Sebastian and Oscar occupy extremes on a spectrum was to explore not just how different they were but also what they might have in common with one another. 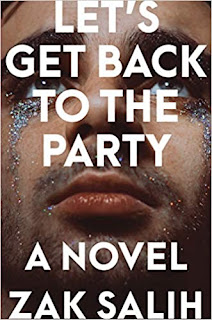 A: The novel’s title comes from its epigraph, a brief anecdote about leaving a party and being frightened by the immensity of the universe.

The “party” in question means many things to both of the main characters; for me, the “party” is everything that keeps us from living in the present, and from coming to terms with the things in our lives (our pasts, our mortality) that we often can’t bear to think about.

Q: The Kirkus Review of the novel says of your characters, "There’s a deep tension between the two that’s sexual but also political: Neither can entirely stomach the life the other has chosen." What do you think of that description?

A: I’m incredibly grateful for that description. I never wanted this novel to be a simple love story about two very different people. In fact, I often think of it as a cockfight (pun very much intended) between these two characters and their ideas about what it means to be gay, and what an “authentic” life as a gay man should look like.

A: I had a general idea of how the novel would end, and where to leave these characters.

That being said, I opened myself up to the possibility of being surprised, and I certainly was in several instances.

Perhaps the biggest way the novel changed from my initial conception was that, to borrow from Virginia Woolf, I started out writing toward death and ended up writing toward life instead.

A: It’s back to the salt mines, working on some stories, some personal essays, and a new novel that’s far removed from contemporary gay life—but, I feel, still pretty queer.