Kelly Bowen is the author of the new historical novel The Paris Apartment. The author of many other novels, she lives in Winnipeg.

Q: What inspired you to write The Paris Apartment?

A: From as far back as I can remember, history—and especially the history wound through the branches of my own family tree—has always been a source of fascination for me. As such, I am often the recipient of “old things” found in relatives’ basements and attics, an eclectic array of items boxed and marked with a label that always reads “For Kelly.”

A number of years ago, one of those boxes that came into my possession contained the diary of my great-uncle, Private Percy William Shields, killed in action on the battlefields of France on September 9, 1918, age 25.

In his diary, Pte. Shields wrote in great detail about his wartime experience, offering the reader a vivid glimpse into what he endured during World War I.

Twenty-two years later, both my grandfathers would serve in World War II, in the RCEME and the RCAF respectively, and while they were lucky enough to make it home, they didn’t keep a diary. Nor did they speak at all about their experiences, not to their children and certainly not to their grandchildren. The subject was off limits and it was as if those years had never existed.

Except they did exist, of course, and even if my grandfather did not speak of them directly, he did share his service in the RCEME with me in a way that I didn’t recognize until I was much older.

By the time I was 10, I could read radio schematics and identify and solder the correct capacitor, resistor, or transistor into place. Together we rebuilt a hulking ’38 RCA Victor and a pretty ’42 Northern Electric, the latter which he presented to me for my 13th birthday.

Those hours fueled my fascination with radios and their many uses during the war, and I found the stories of the individuals who relied on those radios to send vital and clandestine information back to the Allies riveting.

The fictional characters of Sophie Seymour and Estelle Allard in The Paris Apartment are based on the very real lives of Pearl Witherington Cornioley, Virginia Hall, Christine Granville, Nancy Wake, Josephine Baker, and Andrée de Jongh.

After reading the memoirs of those extraordinary women, and thinking of my own family members, I was left with the questions: What makes people choose to either share or keep private an experience that so drastically impacts their life?

Is it better to share such an experience in detail with those left behind the way my great-uncle did in his diary? Or is it better to leave the past sealed, sharing only aptitude from those years, the way my grandfather did with me?

For me, writing The Paris Apartment was an exploration of different choices made for different reasons. 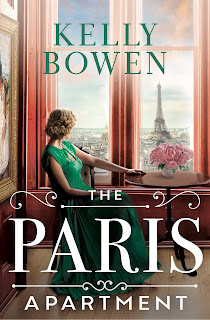 A: I was lucky enough to have traveled through France and the UK in the years before the pandemic shut everything down, and I relied on photos and maps and information I gathered during that time.

I used many sources, including reference material, memoirs, and declassified records available for request online.

When I couldn't find what I was looking for in books or records, I reached out to those who are experts in their fields, such as The Bletchley Park Trust and research historian David Kenyon, who were gracious with their time and knowledge (and answered my questions about the Lorenz and provided me direction to the TICOM archives).

And for questions about processes around the recovery of stolen Nazi art, The Monuments Men Foundation was a huge help.

I think, if I had to pick the single thing that surprised me the most, it would be my research into the Ritz Hotel during the Occupation. Here, the manner in which Paris was oppressed was amplified.

While the city was spared the fiery fate of Rotterdam or Warsaw, Paris was conquered under a grotesque veneer of civility, an insufficient, deceitful mask over the human tragedy and devastation that the city would still suffer at the hands of the Nazis.

While Paris slowly starved to death, Nazis dined on caviar and champagne in the Ritz. While its citizens were subjected to unspeakable cruelties, officers entertained themselves with cocktails at the Ritz's bars, their sidearms checked at the hotel door, because to be armed while at leisure at the Ritz was considered gauche.

The more I read, the more this terrible dichotomy became clear and it was this, in part, that I chose to address in The Paris Apartment.

Q: Why did you decide to focus much of the novel around art?

A: Art has been a love of mine since I was small—I love to paint and I am a museum fanatic. To me, art represents a record of history, a living story of individuals throughout the millennium, interwoven with a personal commentary from the artist, should one look closely.

The deliberate and systematic destruction and theft of art that occurred during World War II was on a scale that almost defies belief and showcases greed, ignorance, and intolerance at its worst.

I know we cannot compare or equate the loss of life to the loss of objects but it is what the loss of art represents that my character, Estelle, addresses.

When presented with a glimpse at part of Goering's stolen hoard, she wonders how much tragedy is attached to each piece and what the acquisition of each stolen piece has cost humanity? How much history and culture will a family or country lose when it loses the things that unite them and tell the stories of their pasts?

Delving into the real-life discovery of the Gurlitt hoard in the course of my research left me both dismayed and disturbed, and I reference it in The Paris Apartment. That so much stolen history could be deliberately concealed for so long is appalling.

Worse, individual works from this stolen hoard were sold over the years—whenever Gurlitt needed money—and I'm left to wonder if those purchasing dealers repeatedly chose not to ask the questions they knew they did not want the answer to.

As pieces of art stolen by the Nazis continue to pop up on the marketplace, many organizations are working to help families and countries recover the lost pieces of their history and culture, but it is a slow and laborious process.

When my characters of Gabriel and Lia discover the apartment's own hidden collection and suspect it's been stolen, finding the true owners is first and foremost on their minds.

Q: What do you think the novel says about family secrets?

A: I think that The Paris Apartment offers a glimpse at the consequences that past choices can have on the present, intended or unintended. Estelle deliberately kept her secrets, choosing to share them with her granddaughter only after her death. Sophie tried to leave a record for her family but it was too late, circumstance intervened, and her secrets were lost.

Would the secrets that both of these women kept have made a difference in the lives of their descendants, had they been revealed earlier? Would it have changed the way that future generations lived? Or did fate ensure that the secrets were discovered at exactly the right time?

I'm not sure that there is a single right answer and I'll leave the reader to their own conclusion.

A: I am working on a new World War II-set historical fiction novel based on the Jedburgh teams dropped behind enemy lines to assist Operation Market Garden.

Critical for the Allied advance following D-Day, these teams worked in tandem with resistance networks while surrounded on all sides by enemies. I will have more details to come soon!

A: For anyone who would like to read more about the extraordinary women upon whom I drew inspiration from for The Paris Apartment, I'd recommend the following:

The Spy Who Loved: The Secrets and Lives of Christine Granville by Clare Mulley

Wolves at the Door: The True Story of America's Greatest Female Spy by Judith Pearson

A Life in Secrets: The Story of Vera Atkins and the Lost Agents of the SOE by Sarah Helm