Joshua M. Greene is the author, with Renee Hartman, of Signs of Survival: A Memoir of the Holocaust. It's a middle grade book for kids that focuses on Hartman's experiences as a Holocaust survivor. Greene has written books and produced films about the Holocaust. He lives in Old Westbury, New York.

Q: How did you come to work on this book with Renee Hartman?

A: Renee was married to the late renowned Holocaust scholar Geoffrey Hartman, who had been faculty liaison for the Fortunoff Video Archive for Holocaust Testimonies at Yale University.

I sit on the board of the Archive and was privileged to have Professor Hartman as consultant on my first Holocaust feature film for PBS, Witness: Voices from the Holocaust. Renee was featured as one of the 17 witnesses who appear in the film, and I’d always wanted to tell her story in greater detail. 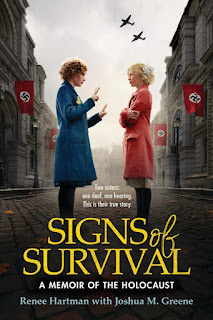 Q: In your Epilogue, you write, "This book is an attempt to restore to Renee and [her sister] Herta the voices, identities, and memories that the Nazis sought to destroy." Can you say more about your hopes for this book, and what it represents?

A: We are rapidly approaching a time when the Holocaust risks becoming one more artifact of ancient history. If we wish to understand anything about the world we live in, we cannot ignore the Holocaust.

Still, a number such as 6 million is incomprehensible. We cannot understand 6 million stories. We can know one story, and eyewitness testimony is arguably the most powerful vehicle for the stories of those who were there.

Renee’s story is unique: I am not aware of another such testimony: a sister who served as the ears for her deaf family.

Q: What impact did working on the book have on you?

A: The dual-voice narrative of Renee and her sister allowed me to gain insights into the Holocaust that I’d never had.

Survivor memoirs are predominantly one person telling his or her story. Here we have a story told by two participants. The similarities and differences of memory are very important for recognizing that there is no one “right” way of understanding Holocaust history.

Q: What do you hope young readers take away from Renee Hartman's story?

A: An appreciation for personal narrative as a way to access most directly events that otherwise remain imprisoned on the pages of books.