Kate Albus is the author of A Place to Hang the Moon, a new middle grade historical novel for kids. She has worked as a research psychologist, and she lives in Maryland.

Q: What inspired you to write A Place to Hang the Moon?

A: The story revolves around the World War II evacuation of London, and it was really that historical event that was the inspiration.

I first learned about it – appropriately enough – in a book. At the very beginning of The Lion, the Witch, and the Wardrobe, C.S. Lewis gives just a single line explaining why the Pevensies are at the professor’s house in the country: “they were sent away from London during the war because of the air raids.”

And that real-world event stayed with me, perhaps even more than the magical world Lewis created. The idea of a million children being put on trains bound for who-knows-where, to be cared for by strangers for months or even years, is endlessly fascinating to me. 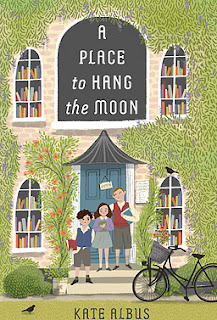 Q: The Kirkus Review of the book called it "A wartime drama with enough depth and psychological complexity to satisfy budding bookworms." What do you think the novel says about the importance of reading?

A: A Place to Hang the Moon is about three children who yearn for the comfort and safety of family, and books are very much a touchstone for them on that journey.

Having not known much family love, stories are the places where Anna, Edmund, and William have dreamed up the mums and dads they wish they had. Books are also an escape for them, and they rely on stories to transport them out of some cold, dark situations.

At its heart, A Place to Hang the Moon is a story about the sustaining power of both family and stories. So I hope that bookish theme will resonate with young readers and help them feel the power of books to get us through difficult and frightening times.

Q: How did you research the World War II-era setting, and did you learn anything that especially surprised you?

A: I did a lot of research, both before and during the writing process. Before I sat down to write, I read a lot of nonfiction about life on the English home front - specifically, a lot of evacuee memoirs, and a lot of diary accounts collected by the British government’s "Mass Observation" project during the war.

Those accounts helped me get a sense of the world the story was set in, and then I filled in specific details along the way by going down an astonishing number of Google rabbit holes: What would a rural kitchen have looked like at the time? What was a typical Christmas celebration during the war? What children’s books were available in England in 1940? When is the best time for planting and harvesting radishes?

I love the research part of things and sometimes have to stop myself from going down those rabbit holes, because I can get lost down there pretty easily.

I think what surprised me the most is the volume of detail available online, and the way some of that content can transport you back in time.

For example, there are a couple of radio broadcasts referenced in the story – speeches by Churchill, by the king, and by a young Princess Elizabeth – and it was extraordinary to hear those recordings, just as the children in A Place to Hang the Moon would have done.

A: It’s funny, because I come from a background in science writing, where you generally know everything you’re going to write before you write it. And I also tend to be a pretty planful and careful person, so you would think that would be the way I would approach a story, as well.

Yet in writing fiction, I find the exact opposite is what works for me. I start with a premise – in this case, the idea that the World War II evacuation of London was an opportunity to find a family – and then let the characters lead me from there.

So other than having a very basic sense that the ending would be a happy one, I really didn’t know the story would end until Anna, Edmund, and William led me there.

A: I’m working on another middle grade historical. It’s set in World War II, just like A Place to Hang the Moon, but this time in New York, which is where I grew up. I was raised on my dad’s and grandmother’s stories about old New York, so it’s been great fun to immerse myself in a world that’s so dear to me.

A: Please visit me online at katealbus.com, or on Twitter @katealbus, and thank you so much for having me, Deborah!