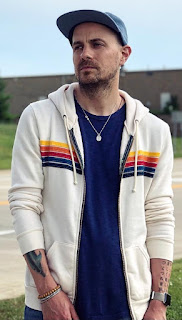 Jackson Bliss is the author of the new book Dream Pop Origami: A Permutational Memoir About Hapa Identity. His other books include Counterfactual Love Stories and Other Experiments, and his work has appeared in a variety of publications, including The New York Times and Tin House. He is the distinguished visiting writer at Bowling Green State University, and he lives in Los Angeles.

Q: What inspired you to write Dream Pop Origami?

A: A couple reasons. I wanted to write an interactive memoir about mixed-race/AAPI/BIPOC identity that had never been done before and I think (I hope) that Dream Pop Origami fits that bill.

Also, I used to fucking LOVE choose-your-own-adventure novels as a boy and boyhood, the transition to adulthood, and the negotiation of AAPI masculinities are some of the biggest themes in this memoir besides love, travel, and identity.

I also think I wrote the kind of memoir I wish I could have read growing up as a mixed-race/AAPI/BIPOC teenager.

I would have loved to have gotten my hands on a memoir that showed me that gender in general and masculinity in particular don't have to be a template of gender performance, violence, domination, and exteriority, but a pliable, complex, contradictory, dynamic, and beautiful thing.

I wish I had been able to read books growing up that showed me that love, empathy, open-mindedness, altruism, self-awareness, kindness, vulnerability, and generosity could be important parts of an evolved, inclusive masculinity.

It kinda astounds me how much the publishing industry wants to ride the wave of intersectional feminism (which is great), but not actually question its own gendering of genre itself.

I love the fact that novels written by BIPOC/trans/queer women, even white women, are being centered and highlighted so much now, but I hate the fact that the memoir and the personal essay and virtually all essays about love and travel and fertility, for example, are monopolized by women writers, most of them white women. That seems to be a deficiency the publishing industry doesn't want to address.

I'd like to think that Dream Pop Origami is one tiny example of how dynamic, original, and creative CNF written by mixed-race, Nisei, hapa, BIPOC/AAPI, bicultural male writers for example, could be if we're just given the chance to write in genres that editors have boxxed us out of.

A: I don't know when the title came to me exactly, but I think its origin story comes from several places.

First, I was thinking a lot about synesthesia in poetry and at some point, I started wondering what dream pop would look like as origami and also what origami would sound like as a musical genre.

Another reason for this title is that dream pop itself, as a genre, is so contradictory, complex, evolutionary, and confusing. It's always changing. It can be so dynamic at times, but also so emotional, vulnerable, sad-beautiful, distorted, haunting, and slightly undefinable.

That's exactly how I see mixed-race identity. That's also how I want readers to see this memoir.

Last thing, once I started writing the index, I realized that I could--crudely, unfairly, somewhat arbitrarily--divide the short lyric essays and autobiographical lists into three separate sections of Dream, Pop, and Origami, all centered on different themes, which is another way in which this memoir is both split up and reconceptualized, but also unified and interconnected.

I feel like that describes virtually every mixed-race person I've ever talked to in some way.

Q: Your website describes the book as “an experimental memoir.” How would you define that, and how did you come up with the book's structure?

A: I think Dream Pop Origami is experimental because it gives readers an incredible amount of agency in terms of how they read this memoir and how this memoir is told based on the choices they make as readers. 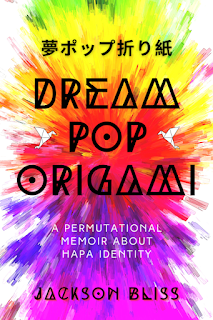 The operant metaphor I've been using is the relationship between a movie script and its director. I'm the screenwriter and readers are the directors, deciding where the narrative goes, how the text is laid out, which themes disappear and which ones repeat themselves.

All of those questions readers get to decide based on the choices they make after every chapter where they're given a "next menu" that gives them 3-5 options to other chapters.

Beyond that, I've incorporated certain experimental elements here that I think are useful at constructing ethos, playing with form (visually and textually), establishing vocalization, and developing a piecemeal narrative arc, just in a heterodox way: there's a Nisei quiz in Dream Pop Origami, there's a flow chart about irony and self-awareness, there's at least one picture, and a Twitter essay.

The narrative structure oscillates between essay and list. There's  an entire essay told through addresses, a chapter that's mostly a blank page for readers to fold origami, there's even a chapter where the book analyzes itself and fleshes out things that I discovered about myself through (re)reading this memoir over and over again.

Lastly, one of the arguments I make in this memoir is that the act of reading is an act of suturing narrative fragmentation.

Most mixed-race/bicultural people I know are split into an infinite number of fractions, identities, communities, roles, positions, and perspectives (often by a society that refuses or is incapable of seeing us as whole people) and this memoir makes readers complicit in reconnecting the fragmentation of the mixed-race self, which I think is kinda revolutionary in its own way.

Q: The author Marie Mutsuki Mockett said of the book, “From an exploration of video games to Tibetan higher planes, Bliss expresses the varied ways in which the second sight of his hapa artist self animates the landscape, while taking readers on a journey through unabashed emotion, memory and a life lived with intensity and great feeling.” What do you think of that description?

A: I love it, but then again, I love Marie too as an artist, a fellow hapa/mixed-race person, and a human being.

I first saw her read and talk at a panel of mixed-race writers at the Mixed Remixed festival here in LA, founded by Heidi Durrow, which pretty much changed my life in so many ways because for the first time in my life, my mixed-race identity became normative for two days, something hapas never get to feel!

Also, American Harvest is a quiet masterpiece, so this blurb makes me deliriously happy because it comes from such a deeply talented writer and it captures the range, the complexity, and also the hybridity of this memoir in ways I'm incredibly grateful for.

In that same blurb, Marie also claims that Dream Pop Origami is a genre-defying book of magic spells (and the spells all work), which might be one of the dopest things anyone has ever said about one of my books.

A: To be honest, because I have three books coming out in the space of nine months (don't try this at home, kids!), I haven't touched a manuscript for anything except edits for the past two years with the exception of MIXTAPE, my newsletter on Substack.

I hope to get back to writing new shit soon once I'm done with all the PR work for all three books, which is the price you pay, I guess, as a small press author promoting your work. I'm not complaining, I'm just saying.

Once I'm back to writing (let it be soon dear universe!), I have three major projects in the works: a literary fiction novel about a group of mixed-race/hapa prodigies, a counterfactual trilogy that centers the three major life decisions (one novel for each major decision) that a mixed-race/hapa protagonist makes that takes him to Japan, South America, or grad school in LA, and finally several Gen X screenplays about mixed-race/AAPI/hapa/BIPOC writers in LA à la Before/After Sunset where characters basically just talk the whole time.

I'm also working on a couple LPs of post-rock and electronic music, but I don't wanna get too off track.

A: Sure, why not? First, if this memoir sounds interesting to you or someone you know, please go to your fave local bookstore and ask them to order a couple copies (the distributor is Ingram, that's all you have to tell them besides my name).

This is one of the best ways to support local businesses and small press authors, neither of whom have the PR machinery or the budget that big-five presses do. Ditto with your local library.

The other thing is, whichever books you read--it doesn't have to be mine, though I'll love you if it is--take a couple minutes and drop a five-star review on Amazon and Goodreads for any author whose book means something to you. It can really make a world of difference for us.

A book's Goodreads cumulative ratings, for example, gets replicated on a lot of other online sites too, from web-based bookstores to literary and culture sites.

Thank you so much, Deborah, for this interview. It's been fun chatting with you.