Amy McCulloch is the author of the new novel Breathless. Her other books include the young adult novel The Magpie Society: One for Sorrow, and she was editorial director for Penguin Random House Children's Books. She is based in London.

Q: What inspired you to write Breathless, and how did you create your character Cecily Wong?

A: The idea for Breathless came to me while I was living at Manaslu base camp [in Nepal].

It struck me that it was the perfect place to set a thriller: the isolation, the lack of authority figures, the risks of the environment like avalanches, crevasses and serac falls, but you’re also dropped on the mountain with strangers – people who you might have never met before, don’t know their backstories or motivations, and yet you need to trust them with your life.

Fatal accidents are considered part of the accepted risk of climbing in these high places – what better place to get away with murder than somewhere already known as the death zone?

Yet I also knew that not many people know that much about mountaineering! So I wanted my main character to also be a relative novice to mountaineering, to give readers a window in which to access this often inaccessible – but exhilarating – world.

By using my own personal experience as research, I hoped to create a compelling, page-turning and yet authentic thriller in Breathless.

Q: What first interested you about mountaineering, and how has it affected you?

A: I actually started with walking! When my marriage broke down, I felt my future crumble in front of me. I didn’t know what to do with myself, so while I processed these big emotions I decided to do something good for my body and I flew out to the Kerry Way – Ireland’s longest way-marked trail – and walked over 250km.

I was amazed by what my body was capable of, so I ventured next to Nepal to trek the Annapurna Circuit. It was there that I fell in love with the big mountains, sparking a curiosity in me to see where my feet could take me.

As I attempted higher and higher summits, I realized I possessed the kind of mental resilience and ability to handle high altitudes that made mountaineering a perfect activity for me. 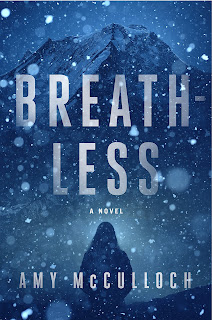 I love how grounding it is – you have to be truly present while you’re climbing so as not to make any mistakes. When I’m in the mountains, I’m not worried about the past or my future. I just get to live in the moment – and see some incredible views.

Q: The writer Abigail Dean said of the book, “This thriller would be unsettling enough at sea level, but in the death zone, it’s suffocatingly tense. McCulloch combines extreme mountaineering with murder to create a novel that’s chilling, vivid, and entirely unique.” What do you think of that description, and how important is setting to you in your writing?

A: I am so honoured! Abigail Dean is one of my absolutely favourite writers – Girl A is a brilliant novel.

Setting is hugely important to me because I want readers who are not familiar with the Himalayas to be introduced to a new place, and those who know it well to be satisfied with the description.

It’s also key to laying the groundwork for the thriller aspect of the novel – the environment itself is so dangerous that it unsettles Cecily, my main character, and contributes to her mistrust and suspicion. It was vital for me to make the setting come alive.

Q: Did you need to do additional research to write the novel, or was it primarily based on your experiences (and your imagination)?

A: Oh yes – I did plenty of research! I read almost every mountaineering book I could get my hands on, historical and contemporary, to try and lay the groundwork for my various main characters.

Yet it’s also true that mountaineering has had a sea change in the past few years, with the high peaks becoming more accessible to novices – and the demographic of climbers is changing, with more and more people of colour and women.

Much of my research was done “first hand,” talking to other mountaineers, and when I was invited to join one of world’s top climbers – Nims Purja – on his expedition to Manaslu as part of his record breaking “14 Peaks/Project Possible” mission, I had to go. It was the opportunity to witness history being made first hand.

A: I’m just starting the edits to my second thriller, this time set in Antarctica! I want to continue writing female-led adventure stories set in extreme environments – with plenty of mystery and murder, of course.

A: While I don’t have any other mountain climbs planned, my last adventure was to complete the Marathon des Sables – a 156 mile ultra marathon through the Sahara desert. The things I do in the name of research!