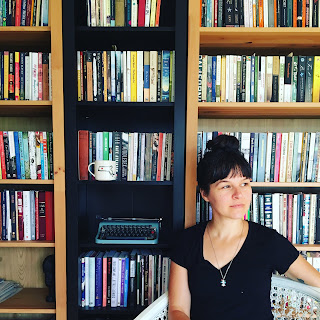 Sara Rauch is the author of the new story collection What Shines from It. Her work has appeared in a variety of publications, including Paper Darts and Hobart. She teaches writing at Pioneer Valley Writers' Workshop and Grub Street, and she lives in Holyoke, Massachusetts.

Q: Over how long a period did you write the stories in What Shines from It, and how did you decide on the order in which they would appear in the collection?

A: The stories were mostly written between 2012 and 2014, though three of the stories (“Seal,” “Free,” and “Abandon”) feature characters from earlier failed novel attempts, one of which dates all the way back to 2004!

I will often stick with a character for years until their story feels right, though I don’t do this intentionally. Sometimes a character just won’t leave me alone.

The stories were originally ordered differently than they currently appear—I had an intuitive sense of them flowing thematically one into the next, but as I worked through the manuscript with Leah (Alternating Current’s editor) she suggested altering the flow so that the themes were given more of a chance to breathe.

I liked her new order, so we went with it. 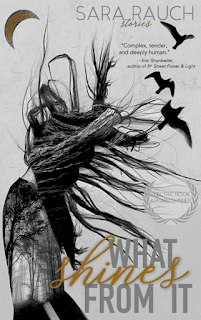 Q: Do you see any particular themes running through the stories?

I’m really obsessed with how we co-exist with memory—how we are constantly reacting to our pasts even as we navigate the present and future.

There’s also a strong focus on the fluidity of female sexuality, and there’s a fair amount of infidelity and heartbreak.

I like to put my characters under extreme pressure and then see what happens when they crack open. I’m of the opinion that we are at our most whole when we’re broken and growing from that brokenness.

The last big theme in What Shines from It is what I call the wild vs. the domestic. Essentially, I’m curious about how the natural world and humans influence each other. There’s a lot of tension there, even on a small scale (as the mice in “Addition” show).

A: The title is taken from the opening lines of Anne Carson’s brilliant book, The Beauty of the Husband: A Fictional Essay in 29 Tangos. The full stanza reads: “A wound gives off its own light/ surgeons say./ If all the lamps in the house were turned out/ you could dress this wound/ by what shines from it.”

I’d chosen What Shines from It as a working title, but it wasn’t until I wrote “Kintsukuroi” (which was originally called “What Shines from It”) that I knew that the collection had found its full expression, and the title could remain.

It was important to me that there be a sense of hope, despite the bleakness of some of the stories, to the collection, and I think What Shines from It really speaks to this idea of light emanating from our darkest moments.

Like Leonard Cohen’s lyrics from “Anthem”: “There is a crack, a crack in everything/ that’s how the light gets in”—which plays with a similar image—What Shines from It signifies the unexpected ways in which we can be illuminated.

Q: Who are some of your favorite short story writers?

It took me a long time to come around to short stories, but once I started reading and studying them regularly, I fell in love with the form. Now, they’re the bulk of what I read.

A: Last year, I completed the first draft of a novel—about a pair of star-crossed lovers who are unexpectedly thrown back into each other’s lives—which I’ve just begun the process of revising.

I’m a fairly slow writer—I trained first as a poet and am easily consumed with an obsession for the “perfect word”—but I’m hoping to have a revised draft of said novel done by the end of this year.

I’ve also got a collection of inter-related lyric essays that I like to say I’m “simmering.” The essays explore the knotty intersections of sex, god, fate, and power. I don’t know if this collection will ever be something I try to publish, but writing it is emotionally and spiritually important to me.