Lisa Rogak is the author of the new book Rachel Maddow: A Biography. Her many other books include And Nothing But the Truthiness and Barack Obama in His Own Words. She lives in New Hampshire.

Q: How would you describe Rachel Maddow's impact on the media landscape today?

A: She's impacted the media landscape in that even more than a decade after her show debuted, there's no one out there who comes close to her. No one has even tried to copy her because her style, intellect, and wit combine to create a unique powerhouse, so it's no surprise that her ratings have remained consistently high through the years.

Q: You've said that "it's really important for me to dig through the early stuff" when it comes to researching the lives of well-known people. Did you find anything surprising when you researched Rachel Maddow's life?

A: I didn't find anything surprising; then again, I'm never surprised by what I find. Some of which, of course, never makes it into the final book. But the early stuff helps me to connect the dots later on, and to also occasionally say *that's* why she's like this or did this later on. 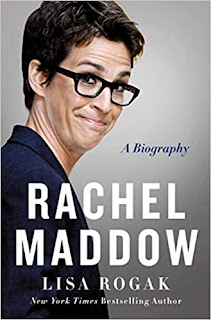 Q: You write of Maddow, "She considers herself to be an outsider, first and foremost and that has shaped her philosophy and career like nothing else." Can you say more about that?

A: She came out as lesbian with great defiance when she was in college, and she never wanted to fit into any group; she's always taken great pride at being on the outside looking in, perhaps providing a great way to provide commentary on public figures who don't necessarily welcome it.

This outsider philosophy has naturally extended throughout her career as she's been able to succeed on TV (and elsewhere) without having to mold herself to the photogenic norms of such a visual medium; instead, her intellect has gotten her there.

A: I just finished another biography and will finally finish my long-suffering comic novel.

A: Nope! Time to get back to work!