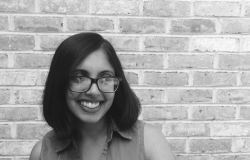 Rashi Rohatgi is the author of the new historical novel Where the Sun Will Rise Tomorrow. Her work has appeared in a variety of publications, including A-Minor Magazine and The Misty Review. She lives in Norway.

Q: How did you come up with the idea for Where the Sun Will Rise Tomorrow, and for your characters Leela and Maya?

A: Where the Sun Will Rise Tomorrow is the story of a girl’s estrangement from her community.

Growing up in Pennsylvania, we were often encouraged to leave town in two ways: firstly, by people telling us to "go home" (because we didn’t look the part) but also by well-intentioned people suggesting that once we left our small town we’d find where we “truly belonged.”

Both were extremely frustrating, and when I returned to my hometown as an adult to teach at a local university and saw that this two-fold refrain was still going strong, I felt moved to write about it.

I’d spent the past several years in London, where the news had recently been dominated by three young women who’d left school to join ISIS, and so overall I really wanted to write about what it means to be a teenage girl about to leave.

Leela and Maya aren’t based on specific people per se, but Leela is a little bit based on Beyonce’s “Becky with the good hair.”

A: The novel is set in a fictionalized version of my mother’s hometown and so I did a lot of the research before I conceived of the novel, just out of personal interest.

When I sat down to write, I realized I’d never talked to my mom about turn-of-the-century Patna, and so I called and asked her and found she’d never learned about it in school. 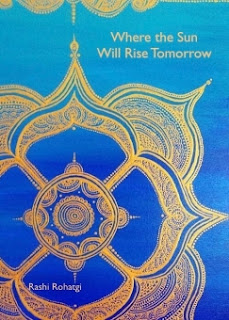 I’m not sure why I was surprised – at this very time in my life, my husband was writing a book about an author who’d gone to the same small school I attended and while we’d spent a lot of time on local history in grade school she hadn’t made it onto the syllabus at all – but it made me want to include the characters’ thoughts about how and what they’d teach their pasts and their present.

I was also a bit surprised by how much research I felt compelled to do to write a novel that does not purport to be historically accurate. If Leela was alone somewhere she’d never have been left alone in 1905, I still wanted that anachronistic experience to sound right, smell right, feel right.

A: The title evokes in part the Japanese moniker “Land of the Rising Sun”; although for the protagonist, Leela, the concept of home is a very local one, for her boyfriend, Nash, studying abroad in Japan has made him think of his home as The East, which he sees as a network of allies in their fight for national self-determination.

Studying abroad was a formative experience for me – so formative that I now teach students studying abroad – but we’ve all been next to someone at a party who can’t stop talking about their latest trip and how much it blew their mind, and thought, “this is ridiculous.”

I can imagine a 21st century Leela trying to shut her boyfriend up by saying, “Look, Nash, the sun may rise in Japan today, but what about tomorrow?” And then she’s stuck trying to justify what she means, too.

A: I had an inkling that what is now the last scene would be the end, but I kept talking myself out of it.

I followed Leela as she arrived in the UK, as her relationship with Nash grew strained even as their commitment to the independence movement strengthened; I wrote about Maya and Hassan’s granddaughter, Ruby, listening to the student protests in Chandrapur in the ‘50s, and even followed Ruby’s granddaughter and Leela’s descendants into the contemporary period. Who doesn’t love a good family chronicle?

But ultimately I came back to my understanding of this period in Leela’s life as standing on its own – clearly important to us because of echoes and repercussions, but diminished, in the telling, under their weight.

A: I’m working on a novel set where I live in northern Norway. We’re a vibrant Arctic town with an engrossing history – but this time I’m not writing a historical. Instead I’m fascinated by what it means to be brown, here, now, and so far that is part of what ties my characters together.

I’m also revising a retelling of the Indian epic Ramayana, which, with its narrative of exile, has naturally become significant to diaspora communities.

A: The henna designs on the cover of this book are gorgeous – an amazing mix of traditional skill and contemporary innovation – and the artist, Kavita Kharecha, has a how-to here in case, like Leela and Maya, you want to try it at home: https://www.cosmopolitan.com/style-beauty/beauty/a58999/video-of-mesmerizing-henna-designs/.