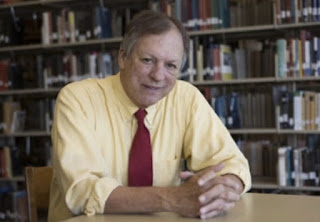 Frye Gaillard is the author, with Marti Rosner, of the new children's picture book biography The Slave Who Went to Congress. His many other books include A Hard Rain: America in the 1960s, Our Decade of Hope, Possibility, and Innocence Lost. He is the writer-in-residence at the University of South Alabama, and he lives in Mobile, Alabama.

Q: Why did you and Marti Rosner decide to write a book about Congressman Benjamin Sterling Turner (1825-1894), and why did you write the book in his voice?

A: Marti and I discovered the story of Benjamin Sterling Turner when I was researching another book, Cradle of Freedom, about the civil rights movement in Alabama. I was in Selma, Turner's hometown, and stumbled upon his story.

Marti, who has been a good friend since around 1980, was about to retire from a career in elementary education and wanted to write a children's book. She introduced me to the subtlety and sophistication of children's picture books, and we decided to write Turner's story.

In our research, we discovered the speeches he had made as a member of Congress, as well as other writings, which gave us a sense of his sensibilities and his voice. We decided that letting him tell his story gave a greater feeling of immediacy for young readers. We had read other books such as My Name is James Madison Hemings, which employed a similar device. 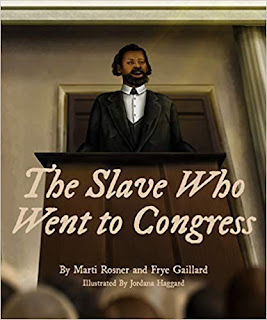 A: We researched  the book at the Selma Public Library, which had extensive files on Turner including a brief, but contemporaneous biography written by a member of his family. We also benefited from the work of Selma historian Alston Fitts, who had done extensive research on Turner and made his files available.

In addition, it so happened that during the Civil War, when his owner went off to fight for the Confederacy, he left Turner, his literate slave, in charge of the St. James Hotel, Selma's largest. That hotel was still in operation when we were researching the book, and is now being renovated to preserve its beautiful historic character. We stayed there, which gave us an added feeling for the history.

And we visited  the monument at Turner's gravesite, erected by an interracial group of Selma citizens roughly a century after his death.

I suppose the thing that surprised us most was the character of Benjamin Sterling Turner. He was so determined, so resolute, in his pursuit of literacy, freedom, and equal rights, and yet he possessed a generosity of spirit that is rare.

He favored the right to vote for former slaves, reparations in the form of land on which they could build their lives, mixed race schools in which all children could get an education, but he also opposed punishment for former Confederates and set out to "bind up the wounds of war."

We thought of Abraham Lincoln's Second Inaugural, "with malice toward none," and the 20th century examples of Nelson Mandela and Martin Luther King, and thought this largely forgotten figure from the difficult years of Reconstruction should be celebrated for his heroic and farsighted vision.

Q: Your book A Hard Rain addresses the 1960s--why did you focus on that particular decade, and do you see echoes from the '60s in today's politics and culture? 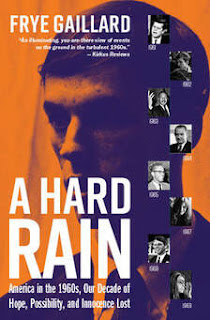 A: I came of age in the 1960s. I was in junior high school when the decade started, and was graduating from college and beginning a career as a journalist when it ended.

During those years, growing up in the South, I was captivated by the drama of the civil rights movement, the Vietnam War and the protests against it, the women's movement, the environmental movement, etc.

I was fascinated not only by the politics of social change, but cultural happenings as well - the music and literature of the decade, the space race, dramatic moments in the world of sports like the rise of Muhammad Ali and the Olympic protests of 1968. It was a dramatic time.

And yes, I do see parallels for today. The great story arcs of idealism and hope on the one hand, and division and cynicism on the other, continue to shape the life of our country.

Q: You write, "I hope to offer a sense of how it felt" to experience the '60s. What impact did the decade have on you personally?

A: I was forever changed by the decade. I saw people about my age, and some who were older, act on a leap of faith that our great country could be made even greater - more inclusive - that our founding ideals could be made more real. I have never gotten over that leap of faith, and all of the hope that went along with it.

That hope has been tested in recent years, but I cling to the notion that it will be vindicated in 2020. We are living, again, in a watershed time.

A: After writing A Hard Rain, which was a massive undertaking, and then a children's book, which was a new experience, I am not writing anything right now.

I'm enjoying my work as Writer in Residence at the University of South Alabama. My duties include not only working with students at the university, but doing public programs about the issues raised in these books.

A: I have a website, fryegaillard.com, that you can glance at if you'd like. I do appreciate your interest.