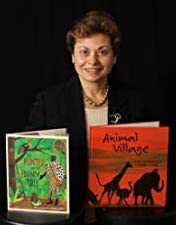 Nelda LaTeef is the author and illustrator of the children's picture book Animal Village. Her other books include The Hunter and the Ebony Tree.

Q: You write that Animal Village was inspired by a story you heard in Niger. How did that experience lead you to write this book?

A: Living in Niger, one of my favorite outings was driving into the bush to see giraffes in the wild. On the return trip to the capital, Niamey, my friends, who were native Zarma speakers, and I would stop at a village to buy Chiclets from a blind woman with a beaming smile and snow-white hair.

She was the village griot and she was often seated in the shade under a large acacia tree. I would buy Chiclets and she would invite us to join her on her straw mat. Soon, children and other villagers would gather and she would begin reciting, in an animated voice, “old stories” from Zarma folklore. She could recreate animal sounds as well as unusual sounds like the patter of rain and the wind blowing.

I did not speak Zarma so I would wait until the drive back for my friends to translate the stories we had just heard into French—the common language that we shared. I would later record the stories in my notebook.

Recently, I was excited to learn that my publisher is planning to translate Animal Village into local languages, including Zarma! I like to think that with the passage of time should these folktales be lost, a Zarma child will be able to read Animal Village in the original language and perhaps be inspired to write his or her own adaptation.

Animal Village was a lot of fun to illustrate because I was familiar with the setting and the vast, open terrain of the land. It was like going back in time. I just had to imagine myself back in Niger and I had plenty of pictures that I had taken while there to assist me. 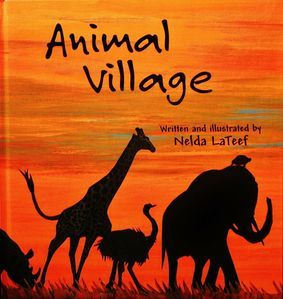 A: I always complete the text first. If changes are required, which they often are, words are a lot easier to edit than art! For Animal Village, I created 16 double-page illustrations, two single-pages for the title page and the author’s page, and the front and back covers.

Once the text is completed, I get scissors and I cut the story into 16 sections. On my studio wall, I have 16 identical picture frames hung in two rows of eight. I tape each text strip to a picture frame in the order the story is told. If my story does not have the makings for 16 “dramatic” page turns, I rewrite the story until it does. I also look to make sure that there is not too much or too little text per illustration.

I illustrate methodically beginning with the first page of the story and continue right through until the last page. It is thrilling to see the progression of the story as it comes alive on the wall. I spend a lot of time gazing at the frames hanging on the wall imagining what the next illustration should look like.

I am constantly thinking about perspective: Should I do the illustration as a close-up or from a wide angled perspective? Is there enough color variation? Are the animals drawn in the right proportion to each other? Is the size of the tortoise too big next to the lion? Is the lion too small next to the giraffe?

At the page turn, should the animal(s) be coming from the right side of the page or the left side? Is there anything vital falling in the gutter (the center line in a double-page spread)? Is the element of surprise there when you turn the page? Is there enough empty space in the illustration to fit the accompanying text? Are the colors as fresh and vibrant as they can be? Does the story flow visually? 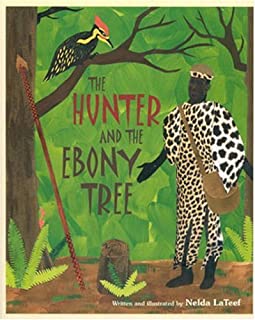 I think this message is best conveyed in the tortoise’s song which appears as a steady refrain throughout the story:

“The moon moves slowly, but it crosses the sky.
Everything is possible, by and by.”

I also hope that children can appreciate the smooth transition of leadership that takes place at the end of Animal Village where the lion chief acknowledges the tortoise’s contribution to the survival of the village and gracefully hands over his chieftainship to the tortoise without fuss or rancor.

A: Bedtime stories that I read to my niece and nephews are among my favorite picture books because they bring back memories of laughter and wonder and they are why I evolved into a children’s picture book author and illustrator.

Those books include: Tikki Tikki Tembo by Arlene Mosel; What! Cried Granny by Kate Lum and illustrated by Adrian Johnson; Hooray for Grandma Jo! by Thomas McKean and illustrated by Chris Demarest; Horton Hatches the Egg and all of Dr. Seuss’ books; When Martha’s Away by Bruce Ingman; The Father Who Had 10 Children by Bénédicte Guettier; The Giving Tree by Shel Silverstein; and Sylvester and the Magic Pebble by William Steig.

A: Mary Catherine Bateson wrote an irresistible book cover blurb for my latest children’s picture book, The Talking Baobab Tree, which I wrote and illustrated. I had no idea that she was William Steig’s niece until just a few days ago! The book is due to be released April 2020. I’ve received advance copies from my publisher and it is fabulous!

I am putting final touches on illustrations for a picture book that I am co-authoring with Dr. Johnnetta Betsch Cole entitled African Proverbs for All Ages. The book is scheduled to be published by Macmillan Children’s as “An Oprah Book” in 2021.

And lastly, I just finished the illustrations for a book that is guaranteed to make you laugh not once, not twice, but at least 18 times. That is all I am going to say about this book for the time being. I love being mysterious!

A: Yes! Animal Village was named Best Books by Kirkus Reviews and has been translated and published into French and Spanish. It is also scheduled to be translated into Danish, Chinese, South African, Portuguese, and Kinyarwanda.

The first book that I wrote was Working Women for the 21st Century: 50 Women Reveal their Pathways to Success, named by the New York Public Library as one of the best books for young adults and those interested in a second career. More information here.

--Interview with Deborah Kalb. Animal Village is a winner of the Children's Africana Book Awards.