Kathleen Donohoe is the author of the new novel Ghosts of the Missing. She also has written the book Ashes of Fiery Weather, and her work has appeared in a variety of publications, including The Recorder and Washington Square Review. She lives in Brooklyn.

Q: How did you come up with the idea for Ghosts of the Missing, and for your character Adair?

A: I think many writers have subjects that they know they will eventually explore when they’re ready. For me, it’s disappearances. In particular, missing persons cases where there is little or no evidence as to what happened.

In 1979, 6-year-old Etan Patz vanished in Manhattan as he walked to his school bus stop. This became a seminal moment for New Yorkers. It was as if Etan vanished in front of all of us. And then none of us could find him.

Right after my first novel sold, I decided that my next book would be about a 12-year-old girl who disappears from a small town.

So I had this very concrete plot, and then I remembered this scene I’d written years earlier, teenage girls in masks, walking through dark woods. This image and the story of the disappearance came together in Ghosts of the Missing.

As for as Adair, the idea was to have two girls, one who is gone, and one who is still here, living with the unending mystery. Adair’s backstory, the loss of her parents and that she’s living with her uncle, emerged from the writing.

Q: The novel takes place in the town of Culleton, New York. How important is setting to you in your work? 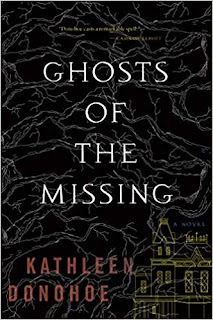 A: The setting is vital. I think if you’re writing fiction and it could take place anywhere, take a step back and reconsider. The setting shouldn’t be merely a stage for the characters. It has to have local customs and citizens the reader can sense, even though they’ll never meet them in the book.

In other words, whether the setting is a real place or fictional, the author must create a history for it, a collective memory.

Q: The Kirkus Review of the novel says, "Despite centering the story of two people trying to discover what happened to a missing girl, this isn’t a thriller but more of a meditation on loss and the power of memory and tradition." Do you agree with that assessment?

A: Yes, absolutely. The novel turns on a mystery but it’s not just about the solve. The first part of the book is about the town of Culleton, which is entwined with the family histories of the two girls at the center of the novel, Rowan, who goes missing, and Adair, who is left behind.

The two are from different branches of the same family, in that they share a 4 x great-grandmother. It’s a distant connection but it means they have a joint legacy that encompasses leaving Ireland for America, and all that’s lost and all that’s kept in that transition.

A: I’d like readers to come away understanding how powerful myths can be. I mean both in folklore, and the myths that arise from one’s own family. Also, that families are not just biological families but the ones that form out of need and love and circumstance. 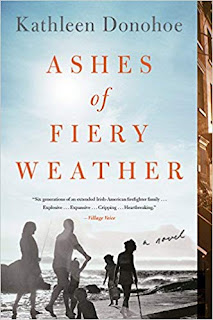 With regard to real-life missing persons cases, I’d like readers to come away from Ghosts thinking twice about making assumptions when there’s a story on the news. As in, this must be what happened because nothing else makes sense, or because statistically, that’s the most likely scenario.

It’s the lack of answers that make missing persons cases so very devastating. When someone is murdered, there’s an investigation and hopefully an arrest and trial but even if it remains unsolved, a murder is an ending.

A disappearance is a beginning. A terrible beginning. It’s very easy to take the certainties of a case and then invent a story to fill in the blanks. We all do it out of a need for closure, for answers.

A: I haven’t settled on the next book yet but I will say I’m very interested in issues around home DNA tests, and how they can reveal family secrets that were believed to be inviolable, or ones that were completely unknown to everybody living.

In the same vein, I’m also interested in the use of genetic genealogy to solve cold crimes. These are the kinds of things that I’m thinking about exploring.

A: In Ghosts of the Missing, the town of Culleton is the birthplace of a writer who is famous for a story called The Lost Girl. That story takes place on Oct. 27, which is my birthday. I chose it because the 27th is near Halloween but it’s not Halloween.

Also, you know when you’re a kid, and your birthday feels like a holiday and you almost can’t understand why everybody isn’t celebrating it? This was my chance and I took it.