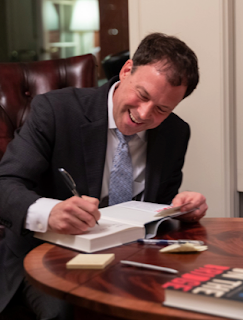 Andrew Marble is the author of the new biography Boy on the Bridge: The Story of John Shalikashvili's American Success. He is the outreach editor for the Taiwan Journal of Democracy, and he's based in Washington, D.C.

Q: Why did you decide to write a biography of the late Gen. John Shalikashvili?

A: I became captivated by three unusual things about Gen. “Shali,” the 13th chairman of the U.S. Joint Chiefs of Staff.

First was his dramatic World War II childhood. It’s hard to believe America’s highest-ranking military officer once sheltered in cellars and sewers during the Warsaw Uprising and then lived as a stateless refugee relying on the charity of relatives in Germany.

Second, he actually came from royalty. He was born a prince in a long line of Georgian princes, and his great-grandfather and namesake, a major general, fought so valiantly in the Crimean War that Alexander II awarded him a gold saber and the title “The Brave.”

Astoundingly, his mother was born in the Winter Palace in St. Petersburg where her mother and aunts served as ladies in waiting to Alix of Hesse and the Grand Duchess. Wow!

Yet it was a third thing that clinched it for me: his curious reputation. Shali was known as a quiet, humble, caring consensus-builder whose self-professed greatest weakness was that he didn’t like confrontation. Really?! I just had to understand how such a man gets created. 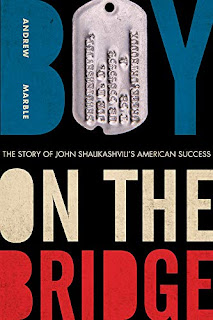 Q: The issue of immigration has received much attention in recent years--what do you think his story says about the role immigrants play in this country?

A: Like many immigrants, Shali had a strong desire to repay America, the only nation to make him a citizen. Having had a front-row seat to the bloodiest carnage in World War II, little wonder he dedicated his life to making America, and the larger world, as peaceful as possible.

And being a product of both the Old World and the New helped make him an exceptional bridge builder between the two.

Like how he played a key role in securing loose nukes in the former Soviet Union, how he helped bring an end to the carnage in Bosnia, and how he spearheaded the peaceful expansion of NATO following the fall of the Berlin Wall.

Anti-immigration or even merit-based immigration policies would have kept him out—and made America and Europe much more dangerous places.

A: I went “all in”—quitting my job, storing my possessions, and undertaking an open-ended research trip that took me to over 30 cities in three countries. I cut expenses drastically. I house sat, couch-surfed, and even lived out of my car.

Was it worth it? Yes! It allowed me to access two restricted archives and interview over 300 people, including one very special person.

After Shali’s death in 2011, his high school girlfriend reached out to me. She was a pistol – still very much in love with him, and ready to atone for betraying him so long ago. She shared secrets that he’d confided in her—keys, it turned out, to understanding the type of leader he became.

A: It evokes one dramatic night, the low point in his life when John Shalikashvili, a stateless, penniless war refugee, is out on a bridge spying his first Americans – GIs coming to end the war in Pappenheim, Germany.

How in the heck did someone with that start in life go on to become the highest-ranking officer in the world’s most powerful military? That’s the question that drives my book.

A: I’m now “all in” in spreading the word about Shalikashvili as a role model. Given the red-hot state of tribalism in U.S. politics, we sorely need a reminder that we’ve had leaders like Shali: an expert in working with diverse groups of people on the thorniest issues and hammering out productive common consensus.

I’m actively looking for any and all opportunities to talk or write about what Shalikashvili can show us about how to be a unifier.

A: This is no typical (read dry) military biography. Rather it reads like an engaging novel. It is light on names, dates, and acronyms and heavy on intriguing and multi-dimensional main and supporting characters, including his parents, grandmother, great-aunt, and high school girlfriend. It’s chock full of cliffhangers as well as both flashbacks and jump-forwards in time.

These literary devices are used to tell a thoughtful, multi-generational story of how nature and nurture combined to create that rare kind of leader: someone both genuinely caring and extremely effective.