Erica Ruth Neubauer is the author of the new mystery novel Murder at the Mena House. Her work has appeared in publications including The Los Angeles Review of Books and Mystery Scene Magazine, and she lives in Milwaukee.

Q: How did you come up with your character Jane Wunderly?

A: She honestly just sort of came to me. I had to sit down and work out her backstory--where I wanted her to be from and where her motivations came from, but her voice just sort of popped into my head and started talking. Not in a way that anyone should be concerned about, of course.

Q: The novel is set in Egypt in 1926. Did you need to do much research to write it, and if so, what did you learn that especially surprised you?

A: I did do quite a bit of research before I wrote the novel, and then even more once I had finished just to make sure that I gotten things right.

Before I started I watched a lot of movies on YouTube about Egypt in the 1920s--and there's something I found surprising, that videos even exist from that time.

I also tracked down an old book about the Mena House Hotel, and that gave a lot of history as well anecdotal stories collected over the years. That was a valuable resource. 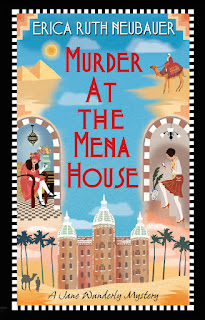 I also had a list of questions that I wanted to double-check, so when we actually went to Egypt, our wonderful and very patient tour guide took the time to answer those questions for me. And I found that when I got home from the trip, I only had to change a few details in the manuscript.

Another thing I found surprising was that by the time my novel happened in 1926, Cairo already had a tram system, and it ran all the way to Giza. I hadn't expected that level of public transportation at all.

I was also shocked that the hotel had a golf course. That seemed absolutely crazy to me, so I wrote it into the story.

A: I had no idea who did it when I started writing this. I'm apparently quite the pantser--there was no outline at all, I just sort of felt my way through it. I was probably more than halfway through when I decided who my bad guy was going to be--and then I went back and tried to make sure that wasn't too obvious.

A: I hope readers take away a sense of fun and escape. I really wanted this to be a good time, and give the feeling of having travelled somewhere exciting--in their minds at least.

Q: This is the first of a series--what's next?

A: In book two, Jane and her aunt are going to England where they will be embroiled in a manor house mystery. And in book three, Jane will find herself on a transatlantic cruise heading back to the States.

A: Pop by my website occasionally--I'm going to do my best to keep it updated with book recommendations--what I'm reading and loving.