Matthew Harffy is the author of the new historical novel A Time for Swords, the first in a series. His other books include Wolf of Wessex. He lives in Wiltshire, England.

Q: A Time for Swords is the first in a series. What inspired the book?

A: The idea came about as a “what if” question. I have read stories that are told by old monks who were warriors in their youth, and I asked myself what would happen if a young monk became a warrior. What if a novice monk, witnessing the first Viking attack on a monastery in Britain, decided to fight back?

The book is also influenced by movies like Seven Samurai and The Magnificent Seven where a ragtag band of warriors defend against a superior force. 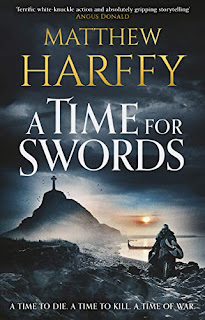 A: All my books so far have been historical fiction and whenever I start a new novel I read as much as I can about the historical events that will form the backdrop for the fictional characters’ story. In this case, this was the attack on Lindisfarne.

I think I was most surprised to read about the politics in Northumbria at the time, and how many people blamed the brutal attack on the fact that the king had done questionable things, such as murdering his opponents and allowing an ally of his, who had apparently committed suicide, to be buried on the holy ground of Lindisfarne.

Q: What did you see as the right balance between history and fiction as you worked on the book?

A: My mantra when writing is “story over history.” I think it is important not to knowingly deviate from known history, but the most important thing for me is to entertain and to tell a gripping tale. If I need to fudge things at all, or if the exact history is unclear, I make a note at the end of the book.

A: The story is really about what path you choose in life and how your choices affect your future. In Hunlaf’s case, he is a well-educated, pious monk, but he turns his back on the church when he finds he has a natural ability for fighting that he can put to good use to defend those he considers his family. He makes some difficult decisions, but is he happier for the choices he makes?

Perhaps Hunlaf’s dilemma will resonate with some readers.

But to be perfectly honest, I just hope readers are entertained.

A: I am writing the sequel to A Time for Swords.

A: If readers like the sound of A Time for Swords, they might be interested in my standalone novel Wolf of Wessex, set in the same time period at the beginning of the Viking Age.

They might also like to check out my Bernicia Chronicles series, which is also set in Northumbria, but before the Vikings in the 7th century. The first novel is The Serpent Sword, which I am currently hoping to make into a TV series. To watch a Proof-of-Concept Trailer for the show, and for more info, check out www.theserpentsword.com.