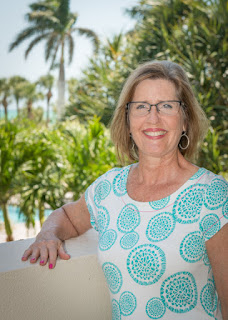 Julie Ryan McGue is the author of the new memoir Twice a Daughter: A Search for Identity, Family, and Belonging. She lives in Indiana and Florida.

Q: Why did you decide to write this memoir, and how long did it take to write?

A: At 48, I was sent for a breast biopsy. Because of our closed adoption, my twin sister and I lacked crucial information about ourselves. We had not been given any family background or medical history, our birth parents identities or their whereabouts, nor the reason why we had been placed for adoption in 1959.

The very real threat of breast cancer being part of our genetic history compelled my sister and me to launch our adoption search. We had no idea how to get started, nor how complicated this vital project would turn out to be.

As soon as we decided to search, I began writing.

First, I wrote in my journal about what was going through my head. I questioned myself about why I had wanted so long, and I worried about what I would find on the other side of the search.

One of my other main concerns was how my adoptive parents would react to the news. I craved their support, but their response was lukewarm. Understandably, they feared that they were about to lose two daughters to our other set of parents. Once the search began and became complicated, I detailed those peaks and valleys in my journal, too.

The idea to write Twice a Daughter: A Search for Identity, Family, and Belonging came from my mother-in-law. She taught reminiscence writing at a community college in Michigan.

As the crazy, twisted adoption search story unfurled, my mother-in-law insisted “You are writing this down, aren’t you? It’s too good a story not to share. The things you are going through will be fascinating to so many readers.”

I underwent the breast biopsy in 2008 and enrolled in writing courses at the University of Chicago in 2010. The search for my birth mom culminated in the fall of 2011. The book will be released in May 2021. Ten years will have elapsed from the initial idea of writing a memoir to Twice a Daughter making it into readers’ hands.

A: The title Twice a Daughter arose from the concept that as an adoptee I have two mothers: a birth mother and an adoptive mother. This duality makes me a daughter twice. My book title is a play on that idea.

In selecting the subtitle, I wanted to convey that both my mothers played a role in my formation of identity. 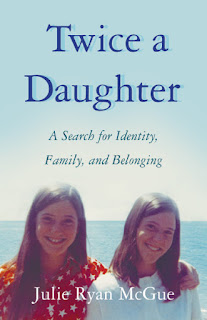 In spite of my birth mother relinquishing her parental rights when she surrendered my twin sister and me to Catholic Charities, I believe that I never stopped belonging to her.

Equally, the moment my adoptive parents signed their adoption papers, I belonged to them and to the family they put together. Identity, family, and belonging became a natural subtitle for Twice a Daughter.

In noodling the title, I also wanted the reader to understand how complex the adoption experience is for all the players: birth parents, adoptive parents, and adoptees.

In Twice a Daughter, I depict the conflicts that arose between me and both of my mothers. On one hand, my adoptive mother didn’t want me to search, and on the other side, my birth mom didn’t want to be found.

My sister and I struggled through those issues together. Together, Jenny and I, crossed the finish line. My twin is as integral to the story as both of my mothers, which is my why I selected the photo of us as teenagers for the cover of Twice a Daughter.

A: For the longest time, my twin sister, Jenny, didn’t read the chapters I sent her. This bugged me, and I finally quizzed her.

Her response, “I lived the story with you, remember? I know how it turns out.” I chuckled with her and volleyed back, “But you don’t know how I weave the parts together.” To which she said, “You are the one who instrumented the search. It really is your story to tell.”

My husband has always been my biggest champion. The role he plays in launching my adoption search is the substance of Chapter One in Twice a Daughter.

On our long drive from Chicago to Sarasota last Christmas, we listened to the final draft of my audiobook. It thrilled me to witness his delight in how I executed my story.

Additionally, I was present when my son finished reading an advance reader copy. His unabashed tears and lingering bear hug warmed my heart. “Mom, I remember some of this search stuff, but I really had no idea how much you went through to get your answers. It’s an incredible book.”

The people whose responses I worried about most were those of my mothers. I elected to change my mothers’ names to protect their privacy, but there exist some delicate subjects and exchanges with them in the heart of the book.

It was not my goal to embarrass them but deleting those pivotal moments would have impacted the story arc and book’s overall message.

Always a class act, my adoptive mother glossed over my concerns. She said, “I think you wrote the book you wanted to write.” To date, my birth mom has not acknowledged reading Twice a Daughter.

Q: What do you hope readers take away from Twice a Daughter?

A: The biggest takeaway is that the adoption experience is complicated. Each member of the adoption triad/triangle has a unique perspective that must be heard and appreciated in order for the healing of adoption loss to occur.

And there is plenty of loss to go around! Most adoptive parents choose to adopt because they failed to conceive on their own. Birth parents lose the opportunity to parent their child, and adoptees lose connection and ties to their family of origin.

For those outside the adoption triad/triangle whose lives have not been touched by adoption, it’s far too easy to judge, to make assumptions, and to accept long perpetuated myths about the adoption experience. It is better to listen with your ears and your heart than to offer comments on what you have not experienced.

Not all adoptees feel the same about their adoption experience: Some choose not to search, to delay their search, or to avoid thinking about or discussing their adoption. Neither of these approaches to adoption search and reunion are right nor wrong. Whatever choice is made is the right one for that person.

When considering adoption search and reunion, having a meaningful and effective support system in place is essential for navigating the process. Participating in post-adoption support helped me to accept and forgive what I could not change, and it gave me the tools to maintain and foster new and complicated relationships.

Finally, I wanted to convey the nuances of each position in the adoption triangle: the possessiveness of adoptive parents, the innate rights of birth parents to maintain their privacy or to achieve connection to their biological child, and to advocate for the adoptee’s inherent right to all information that concerns them.

A: Besides my book launch for Twice a Daughter, I have two projects in the works.

For the past three years, I have been publishing two blogs on my author website. On my Touched by Adoption blog, I write about identity and belonging. I just hired an editor to help me compile my favorite adoption blogs into a book. I envision this as a companion piece to my memoir.

The other project is a second memoir. Twice a Daughter is about my adoption search and reunion story. This new memoir is a coming-of-age memoir, and it will address what it was like to grow up as an adoptee and an identical twin. It will culminate where Twice a Daughter begins.

A: Little-known facts: I still play competitive tennis, a sport I picked up as a kid growing up near a neighborhood park. Ten years ago, I bought a used Steinway and began taking lessons. I love classical music, travel, and taking pictures with my Nikon. Instagram is a bonanza for someone like me who likes to write flash memoir inspired by interesting photos.  I am also a grandmother to three grandsons.

I’m admittedly stubborn and resilient. I persevere often without asking the right questions. Because of this trait, I often get ahead of myself. Yet somehow the paths I undertake lead me to the intended place. I believe in serendipity and synchronicity, but my experiences inform me that hard work pays off.

As I say in my memoir, Twice a Daughter: Never give up trying to find a key to a locked door. That a 2008 breast biopsy led me to undertake a late-in-life writing career is nothing short of astounding.