Nicole Bokat is the author of the new novel The Happiness Thief. Her other novels include Redeeming Eve. She lives in New Jersey.

Q: How did you come up with the idea for The Happiness Thief, and for your character Natalie?

A: Coming from a family of psychiatrists and social workers, I’ve been fascinated by the “Happiness Industry,” and the Positive Psychology movement for a while.

It’s such a departure from the more traditional way I was taught to view mental health and, in many ways, a necessary one. People want their lives to be filled with joy, not just devoid of serious illness.

Along the way, I discovered that there were several annual happiness conferences, including happinessanditscauses.com.au and a yearly World Happiness Report that “ranks 156 countries by how happy their citizens perceive themselves to be.” I was attracted to the idea of opening a book at one of these events.

I needed a protagonist with a secret—one so painful even she couldn’t access it at first—and that’s how Natalie came to me. Over time and many drafts, she evolved to the version of this character who is wrestling with a long-buried trauma. 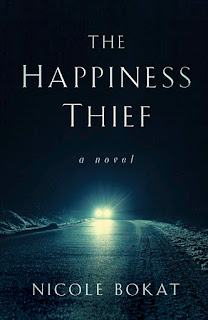 Q: The Kirkus Review of the book says, "Readers follow the protagonist as she works to untangle 'a constrictor knot of lies' and wonders if she can have faith in people she’s always trusted." What role do you see trust playing in the novel?

A: It plays a huge role in The Happiness Thief, starting with Natalie’s inability to trust her own memories about the accident in which her mother was killed.

Her husband’s betrayal deepens her mistrust and Natalie finds herself overly dependent on her stepsister, the confident, successful Happiness Guru, Isabel Walker.

A: I wrote numerous drafts and changed the trajectory of the novel a few times. I ended up writing a tight chapter outline, which I tried to follow, for the last couple of versions. A fabulous freelance editor (and wonderful novelist) proved invaluable at brainstorming and plotting.

A: Mostly, I want them to be engaged in Natalie’s story and rooting for her as she tries to find her footing. I hope they are surprised by the ending!

A: I’m working on a novel called The Burning World about a house fire that destroys a young woman’s family and her quest to unravel the events that led up to this pivotal event in her life.

A: I finished my first “novel” at 10 years old at sleepaway camp. It was 150 pages handwritten.

While I loved acting, swimming, gymnastics, and water skiing, the one activity that stuck with me my entire life was writing fiction. It’s helped me process events, large and small, and make some sense of the world.