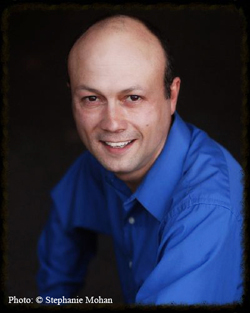 C.W. Gortner is the author of the new book The First Actress: A Novel of Sarah Bernhardt. His many other books include The Queen's Vow. He lives in Northern California.

A: I’ve known about Sarah since my childhood. Both my maternal grandparents were actors, and her name was often cited at home, usually in regards to drama; she was a byword for overreaction.

In addition, I love to write about controversial women who took a stand, and Sarah was revolutionary in the acting world. She changed the rules by setting a more realistic standard onstage and using the cult of personality to garner press attention: she became the first internationally famous celebrity for it.

But, as with most famous people, her journey to fame was full of challenges and setbacks.

She’d been on my radar as a potential subject, but I didn’t know much of her personal story until I researched it for this novel. She turned out to be such an ideal subject, courageous and bohemian, refusing to conform to the norms of her time.

And many of the dilemmas she faced echo for women today, such as her struggle between being a mother and pursuing a career, and her complicated feelings about marriage.

Q: What would you say are some of the most common perceptions and misconceptions about her?

A: Most common is the perception that she was this over-the-top diva. She’s known for wearing a desiccated bat on her hat, an actual taxidermized bat, and outrageous antics like taking to a balloon to fly over Paris as a publicity stunt.

In truth, these weren’t random impulses. She was eccentric, but she was also canny. She understood long before the development of social media marketing that what catches people’s attention can result in sales – in her case, tickets sales to her performances. 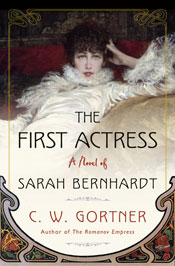 A misconception is that she was a bad mother. She wasn’t what some would call a great one; but she must have done something right, as her son was devoted to her all her life.

Sarah had to make tough choices to be who she wanted to be. With her, many of the misconceptions are a matter of perspective. She was often torn between what her society expected and what she passionately believed was right for her.

Q: You've written many works of historical fiction--what do you see as the right balance between fiction and history as you create your novels?

A: Well, facts are facts. These can’t be argued. But how the people involved lived those facts is where the novelist can play. History is dates and events; within these lies the framework for fiction. An historical novelist must add emotional layers to characters, to flesh out how they perceived and reacted to events.

The balance is different for every novel I’ve written, in that it depends on how much of the character’s personality was recorded for posterity.

In some cases, as with The Queen’s Vow, my novel on Queen Isabella of Castile, I had very little to work with. Isabella left only formal letters and proclamations, no diaries or memoirs. I had to interpret her personality through her behavior, examining all angles, and deciding which motivation seemed most logical to what is known about her.

In other cases, as with Sarah, much was recorded about her personal life, but her published memoirs are embellished and rather fictitious, so I had to excavate why she told a different story than the historically verified account.

In the end, historical fiction shouldn’t alter established fact, but be cognizant that behind the facts are myriad reasons for how and why people behaved as they did.

Q: How did you research Sarah Bernhardt's life, and did you learn anything that especially surprised you?

A: I read a lot of books! Biographies, her assorted letters, and numerous books about her world, like the 19th century theater, as well as social histories to understand the norms she dealt with.

I was surprised by her defiance against the restrictions imposed on women; she’s rarely touted as a feminist icon, yet many of the things she did were essentially in that vein. She demanded equal pay. She refused to submit to the rule that women couldn’t work for a living and raise a child on their own.

It was fascinating to discover her as a brazen standard-bearer for women’s rights before the movement even had a name.

A: I’ve just completed a novel on the life of Jennie Jerome, known to history as Lady Randolph Churchill, mother to Sir Winston. It’s my third book set in the 19th century, following The First Actress and The Romanov Empress, and they are such vastly different women.

It’s also my first book with an American-born protagonist. The daughter of a self-made New York millionaire, Jennie was one of the first in the wave of foreign brides who married into the British aristocracy.

She survived a difficult marriage to become a newspaper editor and theater entrepreneur, a wartime activist, as well as an inspirational force in her son’s career. I’m very excited for the book’s publication in 2022.

A: Thank you for inviting me! I’m available for book club chats and really enjoy meeting readers. To book a chat, go to my website at www.cwgortner.com and send me an e-mail. I hope you enjoy The First Actress.