Gene Doucette is the author of the new novel The Apocalypse Seven. His many other books include The Spaceship Next Door. He lives in Cambridge, Massachusetts.

Q: What inspired you to write The Apocalypse Seven?

A: I did this one a little backwards. Usually—for novels—I come up with the hooky premise first and then try to figure out what kind of story (and genre) it’s going to end up being.

This time around I first decided it would be fun to try writing a post-apocalypse story, and came up with the hooky premise a month or two later: wouldn’t it be funny if the main character(s) slept through the end of the world? Then I had to work out how that could even be possible.

Once I had all of that I was ready to start writing.

Q: How did you create the novel's setting? What did you see as the right blend between the actual Cambridge/Boston, Massachusetts, and this post-apocalyptic version?

A: The novel’s general setting is the logical outcome of a certain fact that isn’t discovered until about a third of the way through the book, and then it makes perfect sense.

On a more granular level, I spent some time looking into what species might dominate this region other than humans. I landed on somewhat modified coywolves, and wild boars. I was also reading a book on climate change while writing, and that definitely seeped into the story.

As for the Cambridge/Boston area, I live in Cambridge, so I describe a lot of locations I’ve personally walked past.

I spent a lot of time standing in parts of town and imagining what it would look like if there were no people and the vegetation took over, which—if you were around me at the time—might have looked odd. 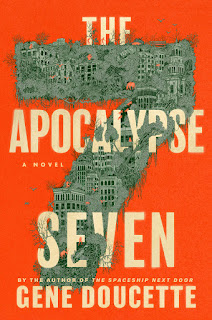 The lack of anthropogenic activity was difficult to imagine (this was before a pandemic sent everyone inside) but a lot of the buildings around here have their share of climbing ivy so that part wasn’t so tough.

A: I knew some broad strokes, but the shape of the ending and especially the big reveal didn’t come together until I was about halfway through the first draft.

I got to it in part by talking through the project with coworkers who were utterly unprepared to deal with that kind of craziness. I did thank them in the acknowledgements, mainly for not calling HR on me.

Q: Why did you decide on seven characters?

A: I’m not a hundred percent sure when I decided on seven, exactly, but I did decide early on to loosely model the survivors on D&D classes.

I did this both because it was a good way to make sure everyone had complementary skillsets and because I thought it would be neat. (This detail in particular had the aforementioned coworkers looking at me funny.)

It’s possible I landed on seven because in the course of writing I ran out of a need for more characters. It’s also possible that since all seven are point-of-view characters I decided writing from the perspectives of more than that would be been untenable.

But the truth is I don’t think I consciously chose seven. I just ended up with seven.

A: I have four things going on right now that I can talk about to varying degrees.

First, I’m halfway through the third book in my hard sci-fi series Tandemstar: The Outcast Cycle. It’s called The Ocean in the Sky and I expect to have it out by the end of October.

Second, I’m working on a serial story for the soon-to-be-launched Amazon Vella platform, called Invasion Nation. I’m hoping to have 15-20 episodes buttoned up by the time that goes live.

The third thing is a new standalone sci-fi novel idea about which I only have one cool technological concept, a slightly less scientifically grounded plot twist, and a setting.

I haven’t decided yet whether it’s going to be in a lighter vein (like The Apocalypse Seven and The Spaceship Next Door) or a little darker. The premise would work great as a horror story, for instance, and I’ve always wanted to write one.

The fourth thing is a screenwriting project about which I can’t say anything, other than that it exists and I’m pretty excited about it.

A: Thanks to some combination of overproduction amid self-isolation during the pandemic, general boredom, and an editor who said, “that title would make a good short story, maybe you should write one for it,” I’ve been diving into the short story market of late.

My novelette Schrödinger’s Catastrophe was published last year in Lightspeed Magazine and is being reprinted later this year in The Year’s Best Science Fiction anthology put out by Saga Press, and another best-of anthology I can’t talk about yet.

A second short, Hypnopompic Circumstance, was published by Lightspeed Magazine just this month with a third—Memoranda from the End of the World—coming out later this year.

The driving force behind my short story writing appears to be starting with a clever title and going from there, so hopefully I’ll come up with a few more titles and keep this going.