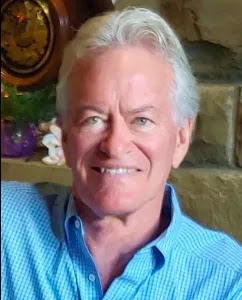 Keith McWalter is the author of the new novel When We Were All Still Alive. His other books include the essay collection No One Else Will Tell You. He lives in Granville, Ohio, and Sanibel, Florida.

Q: What inspired you to write When We Were All Still Alive, and how did you create your character Conrad?

A: My mother’s death from an E. coli outbreak over a decade ago was my wake-up call to an awareness of my own mortality, and eventually became the emotional foundation of the novel.

I’d already written a short memoir, Befriending Ending, which related my experience of her last days and what it taught me about death and dying.

But that was an exercise in facts and philosophy, and I wanted to get at the emotional reality of familial connection, loss, redemption, and solace, and how they interplay throughout life, in a way that a memoir couldn’t.

So I started this novel where the protagonist, Conrad, loses the person dearest to him, and he basically has to reinvent himself and his understanding of his own past and future. I suppose it was an attempt to inoculate myself against a kind of loss I hope to God I never have to experience.

I had also reached a point in life where the unfairnesses and consolations of growing older became a focus, and I wanted Conrad to embody those realities, and to depict how a couple’s loves and friendships change and endure over the span of a lifetime and into late middle age.

A: The title is a direct lift from a line in an autobiographical short story by John Updike, originally published in 1960, in which he describes his adolescence with his parents and his grandmother in rural Pennsylvania. 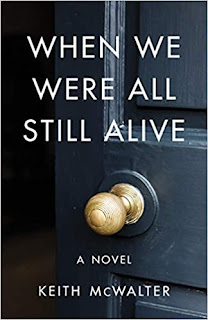 He reminisces about his grandmother’s life and death, and then Updike writes that “when we were all still alive” his life was different: secure and ordered, and now unrecoverable, but deserving of remembrance.

I was on my fifth or sixth draft of my novel, then titled The Widower’s Handbook, when I read this short story, and that line captured so beautifully the tone of loss and wistfulness that I was aiming for that “When We Were All Still Alive” struck me as a better title than what I had. I was sure no one would recognize the source, but if anyone did, I’d have an avid reader for sure.

A: I had no idea how it would end. It was a journey of discovery, and it had many different endings along the way. It was once several chapters shorter, and ended in an ambivalent way that an early reader thought was unsatisfying, so I kept writing.

And it finally dawned on me that Sarah’s death, occurring late in the book, could come not only as a surprise but might strike the reader as a cheap melodramatic trick, and that it needed to be the explicit premise of the story rather than its climax.

This change also required that the time sequence become nonlinear, circling back to where the narrative began before it moved forward again, which seemed a nice reflection of Conrad’s journey out of grief. So yes, many changes and many endings, as well as many beginnings.

A: A renewed sense of appreciation of the glories of ordinary domestic life, which we’ve all been longing for this past year, a deeper awareness of our individual, personal mortality, and the fact that our loves and friendships are our only real solace.

The book’s stylistic reference points were two of my favorite novels – Evan S. Connell’s Mrs. Bridge, a pointillist portrait of a marriage, rendered in brief scenes and small moments – and James Salter’s Light Years, another domestic novel in which the passage of time becomes a central theme, almost a character.

They’re both deeply introspective books, yet utterly uplifting in their effect, and that was the alchemy I hoped to reproduce.

A: Two stories, and we’ll see if either one crosses the finish line. One is a literary science fiction novel (think The Age of Miracles) about the consequences of radically extending the human lifespan. It will be much more of a conventional, plotted genre novel.

The other is a novel about two big-shot finance guys from California who get trapped in New York City on the day of 9/11 and have to make their way back across the country by car to get home.

A: When We Were All Still Alive is very much a “retro” novel in that it harkens back to a time when “literary” fiction was more concerned with intimate relationships and precise description of those relationships than with complex plotlines or exotic circumstances.

If you’re looking for the three “Ds” that dominate current fiction --diaspora, dysfunction, and deep dark secrets -- they’re not in this book.