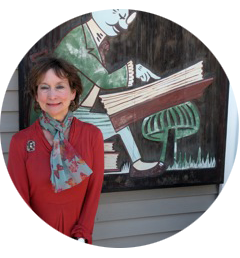 Ellen Prentiss Campbell is the author of the new novel Frieda's Song. It is based on the life of the noted psychiatrist Frieda Fromm-Reichmann. Campbell's other books include the novel The Bowl with Gold Seams. Also a psychotherapist, she lives in Washington, D.C., and Manns Choice, Pennsylvania.

Q: What inspired you to write Frieda’s Song?

A: The real push was that I lived in Rockville, Maryland, very close to the former Chestnut Lodge sanitarium. It was part of our neighborhood. Once a year, it would have an outdoor symposium for mental health providers, and as a psychotherapist, I would attend.

What really pushed me to imagine a story about this place was in June 2009—we woke up smelling a terrible smell. It was the morning after the empty, abandoned lodge had mysteriously burned. Amazingly, Frieda’s restored cottage was still standing.

I began imagining a short story about a current-day psychotherapist and her son who had rented the cottage and were living there. That was the beginning.

A: There’s a really fabulous biography by Gail Hornstein, To Redeem One Person is to Redeem the World. It’s wonderfully eye-opening.

Over the course of my work and my training, I would read and reread Frieda Fromm-Reichmann’s book Principles of Intensive Psychotherapy. It’s a slim book but is really powerful and eloquent. I was reading it closely over the course of writing the book. 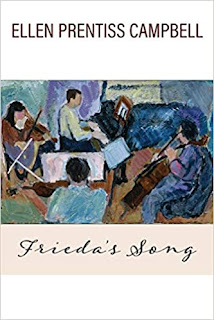 Eileen McGuckian, the former director of Peerless Rockville, the historical society, wrote a history of Rockville called Rockville: Portrait of a City.

Pre-pandemic, I made forays to the Library of Congress. I love the reading room there. I had hoped the forays would yield more information on Frieda, and also on Gertrud Jacob, her friend. There was a scant amount I gathered there—not a great deal.

Later this year, some of Frieda Fromm-Reichmann’s papers will be opened at the Library of Congress for the first time.

Q: What especially surprised or intrigued you in the course of your research?

A: Frieda loved music so deeply. Learning how much she loved music—it was something she listened to, she played the piano, she played in a small chamber group—was a wonderful thing to learn about this fascinating and famous person.

I had toured the cottage. Peerless rents it, and the tenant let me come in when I was writing the book. It’s not furnished as Frieda would have had it, but the restoration is beautiful.

Frieda was small in stature, and it’s a small house. The kitchen is tiny. The appliances are tiny, to fit someone small in stature. I’m not a big person in stature either, and it made me feel very close to Frieda.

A final thing that was very moving and surprising is that in the course of reading the biography, I learned the date Frieda died, April 28, 1957. That was the day my family moved to our new home in Rockville. I had a feeling of such connection with Frieda. We entered the Rockville community on the day Frieda was leaving the world.

Q: What impact did your career as a psychotherapist have on the writing of this novel?

As a writer, when I come to know a character, I’m listening to the character tell their story. It’s informed by my habit of listening.

Q: What did you see as the right balance between history and fiction as you worked on the book?

A: For me, I had to be guided by instinct. Obviously my Frieda is my imagined Frieda, and my current-day characters, Eliza and Nick, are thoroughly imagined characters.

The backbone of fact for me is very closely tied to place. In terms of Frieda’s Song, I did include biographical facts. But the most important thing was place. The actual lodge is gone, but it’s possible to imagine that, and the cottage is there.

Entering the place was the beginning of entering the history. I aimed to be true to the historical facts but the telling of the story is an imagined story of what might have been some of her experiences and impressions. It’s a mingling.

A: Another historical novel, set in Pennsylvania. It’s not exactly where The Bowl with Gold Seams is set, but in that region. I’m beginning the research and writing about a family of artists, inspired by a real family of artists.

For me, what’s most intriguing is a real place and a couple of real people—and what’s unknown that I can fill in.