Q&A with Cara A. Finnegan 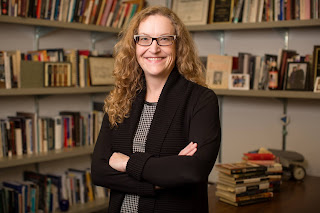 Cara A. Finnegan is the author of the new book Photographic Presidents: Making History from Daguerreotype to Digital. Her other books include Picturing Poverty. She is a professor of communications at the University of Illinois at Urbana-Champaign.

Q: What inspired you to write Photographic Presidents?

A: It’s really the classic story of deciding to write the book I couldn’t find.

That course included a unit on presidents and visual media, and I noticed right away that the Obama White House was doing something new. They were making official photographs of the president available to the public more or less in real time, and they were bypassing the mainstream media in doing so.

As my students and I began working through the White House Flickr site, and talking about the implications of the ways they were circulating these digital images, I looked for something they could read that would survey the broad history of presidents and photography. But I never found anything suitable.

That’s when I realized that there was a book out there just waiting to be written.

Q: In the book's conclusion, you write, "I wasn't all that interested in how...any president used photography. Rather, I wanted to explore how presidents became photographic." Can you say more about that, and about the distinction between the two approaches?

A: When we think about presidents and photography, what immediately comes to mind is famous presidential photographs or presidents known to be especially skilled visual communicators, like Kennedy or Reagan.

But the history of presidents’ relationship with photography is about so much more than that. Photography has never been one thing; it’s always offered an ever-changing set of technologies and practices. And it turns out presidents (even dead ones) were often center stage at those moments when the medium was transforming.

One hundred seventy years later, Barack Obama took center stage when the rise of social media and digital photography opened up new avenues for sharing and communicating photographs and memes.

By virtue of their elite status and public visibility, presidents are often canaries in the coal mine when it comes to new technology, so that’s the story I wanted to tell.

To study photographic presidents is to tell stories of those moments when photography gave us new ways to visualize the public’s relationship not only to presidents, but to the medium itself. 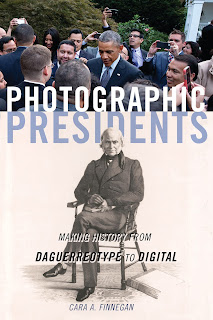 Q: John Quincy Adams, the sixth president, plays a big role in the book. How would you describe his relationship to photography?

A: Fraught! Adams loved science and technology; for example, he was instrumental in the creation of the Smithsonian Institution. But it turns out he wasn’t much of a fan of the new medium.

As a child of the American Revolution and powerful political figure in his own right, Adams had a long history with portraiture. As he put it toward the end of his life, “I question whether another man lives who has been so woefully and so variously bedaubed as I have been.” He understood the power of the visual arts to picture political leaders, and he cared deeply about his own image.

What was exciting to me was that he wrote in his diary about his experiences being photographed. These accounts provided me with insight into what he thought photography did and did not do well.

Between 1842 and his death in 1848, Adams sat for upwards of 50 daguerreotypes. He deemed many of them to be failures, and as an old man he often struggled to sit still with eyes open for long exposure times.

The daguerreotype was, he said, “too true to the original” – something any of us who doesn’t like a photo of ourselves can probably relate to!

While he declared photography to be a “wonderful invention,” ultimately Adams decided daguerreotype portraits were not worthy of being “transmitted to the memory of the next age.” He believed (quite wrongly, it turned out) that Americans would not value the photograph as a medium for preserving history.

A: I had great fun doing the research required to tell these stories. I am never happier than when I get to poke around archives, especially visual archives.

I studied the earliest presidential photographs in the collections of the Library of Congress and the Smithsonian’s National Portrait Gallery. I conducted primary source research in diaries, letters, newspapers, magazines, and web sites from the 19th through the 21st centuries.

And I brought all of those sources together with previous research conducted by scholars from a number of different fields, including communication, political science, media, history, literature, and art history.

One surprising thing that happened during my research relates to the question of the oldest existing presidential photograph.

About a year or so after my visit, the Smithsonian was contacted by someone who had found a daguerreotype of John Quincy Adams among their family’s belongings.

It turned out that the image was an original daguerreotype of John Quincy Adams made a few months before, in March 1843. Now that daguerreotype is the oldest existing photograph of a president. The Smithsonian later bought the image for the National Portrait Gallery’s collection.

When you study a history that’s nearly 200 years old, you don’t expect it to change, but my history of photographic presidents had to change in that moment. That was certainly unexpected, but also exciting.

A: I’m in the early stages of two nonfiction projects.

The first is a narrative history/family memoir about chronic illness in the 1930s.

The second is a trade book about the famous 1930s Farm Security Administration documentary photography project. My first book, Picturing Poverty (Smithsonian, 2003), took up one small aspect of that project, but the full story hasn’t yet been told for a general audience.

A: My research on Photographic Presidents was supported by a fellowship from the National Endowment for the Humanities.

The NEH is a federal agency whose mission is to support humanities research and make it possible for authors, museums, filmmakers, archives, and libraries to create projects for the public to learn from and enjoy.

I’m grateful to the NEH for helping me tell this particular American story and I always want readers to know how important the NEH is to this kind of work.