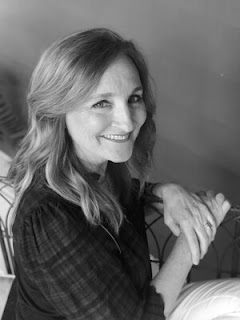 Q: How did you learn about MaVynee Betsch and what inspired you to write this book?

A: I found out about her when my daughter had to do an essay in third grade about a Floridian.

She’s such a colorful personality—it was an easy choice. She stuck with me all these years. This was about 2009-10. It was 2011 when I started to write the story.

A: It’s a trap for me! I can research and research. I have to uncover every stone. It’s like sleuthing, looking for clues. I get caught up in it.

I live in Tallahassee and the state museum here had information about her. I went to American Beach and researched the laws. [Betsch is] kind of the focus of the book, but it’s on Black beaches in America. It’s a book about American Beach.

I watched videos, and I reached out to her family, but her sister didn’t respond. I did find a childhood friend. 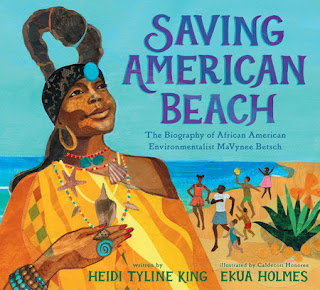 Q: What was the most surprising thing you discovered?

A: There’s a video about MaVynee talking about seeing the rope in the ocean [dividing the Black and White sections of a segregated beach she visited]. I thought about that. It’s the most ridiculous thing I’ve ever heard.

I thought about [the impact] for kids. It’s such a learning point for a child. I could see the way it would be visualized. I wanted people to see that, and how stupid it is.

Q: What do you think Ekua Holmes’s illustrations add to the book?

A: Everything! She’s so talented. This book took such a long time—I started writing it in 2011, and got an agent in 2013, and we sold the book in 2015. Our editor wanted to wait to get on Ekua’s calendar, and then Ekua broke her arm. It was a decade in the making.

When you read about MaVynee cleaning up the beach, and sleeping on the beach, the illustrations using collage are a natural fit. It makes perfect sense.

Q: You discussed the idea of the rope in the ocean—are there other things you hope kids take away from the book?

A: One thing I really hope kids get out of this is that an ordinary person can make a difference. The Beach Lady was not ordinary. She went through profound sadness. She was very well respected for her opera singing, and no one knows why she came home.

Life is not just one happy stroll—but will you let sadness or disappointment stop you from doing something that really matters? That was the beach for her.

A: My next book, Flash, is about John Bonner Buck, the grandfather of bioluminescence. He loved lightning bugs, and wanted to know why they flashed. He became a world-renowned researcher on lightning bugs. His research became the basis for more research—two Nobel laureates built on his work.

His story is more about him and his research, and answers questions about lightning bugs but also about the continuum, the wonder, of science.

In Saving American Beach, that’s something I also was trying to do. It felt like a very musical story. I learned about the opera. An aria starts out high, and then reaches a low point, and then high again. It’s kind of the trajectory of her life. For her, it was the continuum of music.

A: There are little hidden things throughout Ekua’s illustrations. The first time through, you may not catch it. One of my favorites is when MaVynee is dancing on the stage, her dress is the pattern of Michelle Obama’s dress she sat for in her portrait!