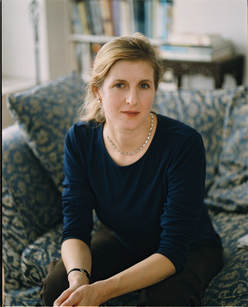 Catherine Gilbert Murdock is the author of Da Vinci's Cat, a new middle grade novel for kids. Her other books include The Book of Boy.

Q: You’ve said you were first inspired to write DaVinci's Cat on a 2008 family trip to Rome, when you told your kids a story about the rivalry between the artists Michelangelo and Raphael. How did you create your characters Federico and Bee?

A: Over the years I tried to turn this anecdote into a children’s book but didn’t get anywhere until I discovered real-life Federico, who spent three years in Rome as a hostage to the pope.

I wanted a modern kid to see Raphael’s reaction, and to play off of this stuffy, snobby little duke. And since Leonardo da Vinci loved cats and **could** have invented a time machine, why not include a cat to bring Bee and Federico together? 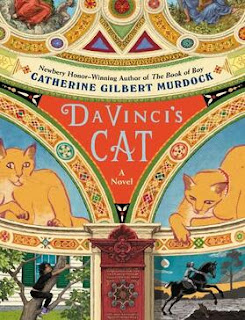 A: I did so much research for this book—about Federico and the artists and the art, but also dress and food because these provide such a sense of the period, and because the real Federico was very fussy about his clothes.

So many details are based on real events, like Michelangelo losing his temper and storming off to Florence in the middle of the night. In reality he was chased by four of the pope’s spies, not Federico, but Michelangelo was just as rude to them as he is in the book. (In real life he threatened to have the spies murdered.)

The biggest surprise, I think, was realizing that modern kids have no experience with rotary phones. The old-fashioned phone is a critical moment in the story, and I had to figure out how to teach Bee to use one. I’ve never felt so old.

A: From the very beginning—like, even before I knew about Federico—I wanted the modern character to screw up the future and then need to save it. I even had the characters of art-collector Herbert and his penniless daughter Miss Bother. This meant a lot of time thinking about what the world today would be like without Michelangelo.

Once Federico arrived with all his family obligations and loneliness, the ending became even clearer—which is to say the feeling of the ending. I wanted both Bee and Federico to end up happy, and the reader to close the book going “oh, wow.” Maybe even shedding a tear.

That said, the details of the climax took forever. I had to repeatedly break each chapter down almost to the sentence level, and then organize and reorganize my notecards. I’ve never put so much labor into a story. Note to self: next time have only one narrator.

A: Delight! I want them to feel that everything works out in the end, even if...well, you’ll have to read it to learn the if.

Hopefully readers will know a little bit more about art, but more than that I want kids to understand that the whole world is made of weird, imperfect people, even if they’re famous. Even if they make history.

A: Nothing! I wasn’t kidding when I said I’ve never worked so hard on a book. I’m still in recovery. But I’m poking at a couple of ideas...

A: That the book is true! Except for, you know, the time travel. But the food comes from actual cookbooks and descriptions of banquets.

Federico has a powerful sweet tooth, so I now know more about Renaissance candy than probably anyone in Pennsylvania, and I’ve developed a taste for candied ginger and sugared almonds. I always had a taste for chocolate.