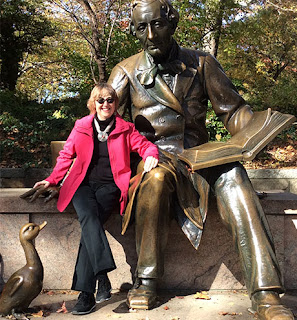 Q: Why did you and Elizabeth MacLeod decide to focus on activists in your new book?

A: Probably because of what’s going on in the world. This certainly isn’t the only activists book. We tried giving it a different spin—“accidental.” There’s what you want to be when you’re a little kid, and what happens to you personally. Events tossed some people into [activism].

Q: How did you choose the activists to include?

A: I wanted a real mix of people. There were people like Greta Thunberg and Jane Goodall, who were very clear. Those people come to mind right away.

But we wanted to find people who were not as big a name—but what they did was important. Or they were more unusual. 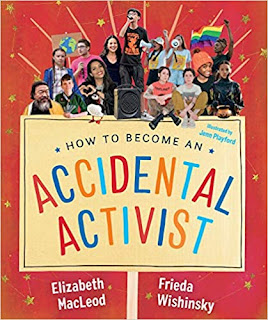 I was in the Bowery [in New York City] taking a walk and stumbled on a long skinny garden, the Liz Christy Memorial Garden. I have a nice urban nontraditional garden, and I’m very attracted to gardens and green space.

I found that the garden was a national historic landmark. Liz Christy worked for the city and lived in the general area. She saw a little kid about to climb into an abandoned refrigerator in a lot full of junk. She dragged the kid to his mother, who said, Where’s my kid supposed to play? Why don’t you do something about it?

And she did. She and her friends tossed out the old junk and got plants, and turned the lot into the first urban city garden. The movement caught on. The only one who gave them grief was Rudy Giuliani.

I found it accidentally. I found a lot of the people in the book that way. She was a descendant of [landscape architect] Frederick Law Olmsted, and she died at age 40 of cancer. She seemed like one of these big personalities. The garden has been there from 1973 until now.

Pete Seeger is in the book. He’s famous [as a musician] but he also started a movement to clean up the Hudson River, and he was involved in civil rights. People don’t know that about the Hudson, and it’s definitely cleaner.

A: If  you can, do something! One of the people in the book is Josh Wong. We went to New Zealand, and on the way there we stopped in Hong Kong. This was before [China cracked down on the island]. Hong Kong was crowded, busy, bustling, and had a lot of pollution.

This was in 2017. A couple of years later, China started clamping down. Josh Wong and other young people did what they could. They marched in huge numbers. In the end, it didn’t work.

Do you tell people it’s a lost cause, don’t try? If you can make a change, sometimes it works. You feel better if you try, within the context of what you can do.

A: A third book [in the series], Accidental Entrepreneurs. There are a lot of young entrepreneurs. It’s interesting to see which stories you gravitate toward. [Elizabeth MacLeod] has others she gravitates toward.

A: We do something unique—we don’t just tell stories, we also introduce how you can be an activist. We have [a list] in the back of the book, of 10 things including “find your passion.” In every chapter, we focus on one of these aspects of how people approach it.

[Overall, though], it’s about storytelling. That’s what you remember—the story. Jane Goodall as a kid had a pet chimpanzee, and she loved Dr. Dolittle. Who she was as a kid morphed into who she is as an adult.