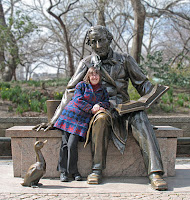 Frieda Wishinsky is the author of two new books for kids, How to Become an Accidental Genius, with Elizabeth MacLeod, and the forthcoming picture book How Emily Saved the Bridge: The Story of Emily Warren Roebling and the Building of the Brooklyn Bridge. Wishinsky has written more than 70 books, and she lives in Toronto.

Q: Why did you decide to write a picture book biography of Emily Warren Roebling?

A: I’m a New Yorker. I grew up in Manhattan and hardly ever, as a kid, went to Brooklyn. I live in Toronto, and when we came back to visit, I started to explore other boroughs. I love Brooklyn. I love the bridge—the views are unbelievable. There’s something about that bridge.

There was a plaque about Emily Roebling, and I looked her up. Her story is so amazing. There’s something profoundly smart about her, and about the way she handled the men.

I’ve written about suffragettes before. Especially after the election a lot of us are looking for women who are unsung. It was such a man’s world. She had to go on a bridge in swooshing skirts, dealing with men all the time, and she pulled it off. And then she became a lawyer! Unfortunately she died a little after that. Her husband lasted into his 70s. 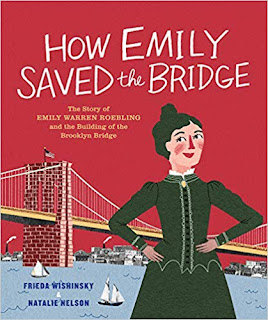 Q: What kind of research did you do to write the book, and did you learn anything surprising about Emily or about the bridge?

A; I’m a huge fan of David McCullough. I own [his book] The Great Bridge, and I owned another book, one of my favorites that he did, Brave Companions. It profiled [Emily's husband] Washington Roebling and mentions Emily a lot, and he does it in a story.

That’s my big thing—story is what we’re drawn to. I used that [book] a lot. And there’s online material. Everybody refers to McCullough’s work as the definitive work on the bridge.

I don’t feel my job is to write the definitive history of anybody. I wrote two books on Einstein, kids’ books, and a writer wanted to know if he was dyslexic. I’m not an expert. I like to make it accessible and interesting and fast-paced, and give you a sense of time and place. I don’t have to tell you what they ate for dinner.

Q: Did you find anything surprising?

A: I didn’t know that she became a lawyer, that she went to Russia and attended the czar’s installation. She seemed interested in so many things. She was a woman of her times and ahead of her time, and she pulled it off in a way that didn’t antagonize the people she had to cope with. It’s one of the main reasons I like her.

Q: What do you hope kids take away from Emily’s story?

A: I always think of a show years ago where famous people would come back and see what happened to what they did. That bridge continues to stand. There’s something almost mythological about it. Like the Empire State Building. Certain places go beyond what they do. New York has a lot of bridges, but the Brooklyn Bridge is the first one we think of. 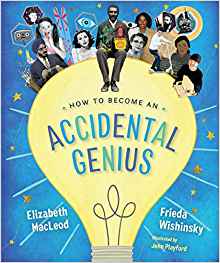 There’s something amazing about believing in something, seeing it through, and having the patience to weather the inevitable blows that come along…

Q: You also have another new book out, How to Become an Accidental Genius. What can you tell us about that book?

A: It’s the fourth book I’ve written with my co-author, Elizabeth MacLeod. Our first book was about the history of food. We’ve done these big projects together. We figure out a topic and if it’s accepted we have an even number of chapters [to write]. She’s more detail-oriented; I’m more big-picture. We balance each other well…

What I love about it is the persistence—people think they’re looking for one thing and then they say, Oh, look what I made! Velcro is in there. The inventor worked on it for years. Nobody knew what to do with it until they started to use it on astronaut suits. Post-it notes are in there. Some are not as well known. It’s about being observant and being flexible. I really admire those qualities.