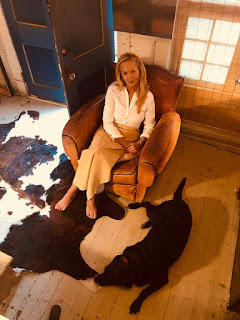 Ellen Stoecker is the author of the children's book The Afrikan Feral Cats of Sullivan's Island.

Q: How did you come up with the idea for The Afrikan Feral Cats of Sullivan's Island?

A: First, Deborah, I would like to thank you for your patience as well as interest in my little book. The inspiration for my children's book is rather layered....a keen interest in history combined with a passion for animal rescue and of course a love of Afrika.

A little history. I attended the University of South Carolina and was heavily involved with the sailing team. We sailed against the College of Charleston and The Citadel. That brought me to Charleston. Charleston where the past and present met in some kind of complicated joy.

I decided to make the peninsula my home. It was the early ‘80s. The Charleston of the ‘80s was a bit like a tattered but still rather beautiful ball gown. The old guard had lost a lot of their money but still presented an elegant front.

The city was such a unique mix of elegance and resilience, overshadowed by a dark past, a complicated history concerning slavery. The start of the civil war began in Charleston and is still a cause of pain with many to this day. 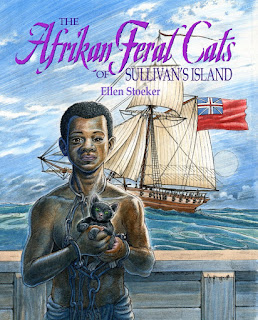 Nature....I had only lived in Charleston a few years when off the tip of Afrika Hurricane Hugo appeared. The storm made a beeline straight to Charleston, as if nature was going to clean away the city's sins. The devastation was enormous and I lost everything, but in a strange twist of fate my friend invited me to go to his family home in Botswana.

Afrika...I believe if you love a place so dearly it will become a part of your DNA. The warmth of the people combined with the incomprehensible wildlife altered me.

I spent months working with displaced wildlife in particular orphaned [elephants]...an experience that has kept me very involved with elephant rescue to this day. I must say Afrika healed me, wounds from a complicated childhood now vanished. I owe so much to Afrika.

When I returned I moved to Sullivan's Island, South Carolina. A tiny speck of geography, a lovely sleepy island with a very dark history. As the island captivated me with its natural beauty it also left me feeling a bit ill at ease.

The history was one of human tragedy. This tiny island was the place where over half a million slaves came before being brought to market in Charleston. The island contained pest houses to keep the unwell, a quarantine.

So much human loss and all to show for it was a very sad slave graveyard that greats you as you enter the most expensive real estate on the Southeast coast. They say that half of all Afrikan Americans have an ancestor who came thru Sullivan's Island...incredible!

My years on the island also had me being that lady that takes in any injured animal: possums, some red tail fox, Muscovy ducks, and feral cats. For a time the city would euthanize the feral cats and I could not stand for that...feral cats reduce rodent populations and are just remarkable creatures.

I used to dress up all in black and open the traps that the city put out in the wee hours of the night. I almost got arrested a few times....yep, that kind of crazy. The cats I knew I wanted to write about and over a 10-year process I combined the cats with the slave trade on the island to create the children's story. Domestic cats’ origin is Afrika. A perfect storm.

A: Writing about another culture's history is like walking into the sea, standing motionless in its beauty and power but also being acutely aware of the perils of disrespecting such a sacred space.

I hope this book could do some good in starting a dialogue with our young ones about slavery. Children can comprehend an animal's perspective on slavery in this book...a unique experience to hear the voices of the cats describe how humans could do this to other humans but animals do not enslave other animals.

Partial proceeds to go to the South Carolina Humane Society and The David Sheldrick Trust in Kenya.

A: Presently I am sending the book to schools in Uganda with basic supplies for each school. This book is also a small gift to Afrika. Two sides of the Atlantic were affected by the transatlantic slave trade. The potential generations lost in Afrika...no one really speaks of it. The slave Olumide is Afrika's hero...he shows the best of humanity in the most inhumane circumstance.

In addition I will be donating all the money from my art work this year to the Akashinga...the all-female anti-poaching guardians protecting the largest population of elephants in Zimbabwe. This is to honor the memory of the Botswana 87, the mass killing of elephants last year in Botswana.

I had the pleasure of taking care of a young Ellie I named Le Petite Aubergine when I lived in Botswana. Now an adult I wondered with a heavy heart if he is still alive. Incredible creatures, elephants. I had to honor those lost lives...somehow.