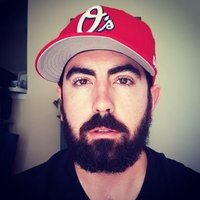 Caleb Michael Sarvis is the author of the new story collection Dead Aquarium. He is the co-host of the Drunken Book Review Podcast and the senior fiction editor for Bridge Eight Press. His work has appeared in a variety of publications, including Hobart and Volt, and he lives in Jacksonville, Florida.

Q: In a review on Pankmagazine.com, Janyce Stefan-Cole writes, "Parental abandonment is a common theme" in the book. Why did you choose to include that theme?

A: I don’t know if I set out to do that really, it kind of just evolved as I continued writing. I’m used to parental figures fading in and out (whether that be parents, step-parents, coaches, writing mentors) and existing in chapters, and I imagine my stories naturally tilt that way to reflect my own experience.

Q: In an interview on thelitpub.com, you said, "I do tend to gravitate towards suffering in a way." Could you give a couple of examples of the characters you've created who deal especially well or badly with the suffering they face? 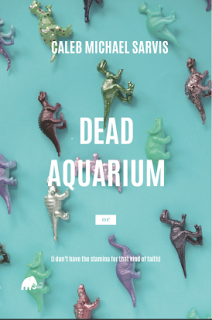 A: I mean, they’re in the book, so I don’t want to give too much away, but the first story begins with a young woman waking up on the roof of her house, a house that is empty because her parents have gone on a permanent vacation.

The last story of the book begins with a man in a house he inherited but is scared to actually move into. Both of these stories become about filling things, which is the only way to deal with empty space.

Q: Why did you decide to set the stories in Florida, and what do you think that setting contributes to the collection overall?

A: Again, it wasn’t necessarily a decision either way. I’ve lived in Florida since 1999 and it still sort of fascinates me some of the things I come across on a regular basis.

The nutria I write about in “Goose Island” is an animal I didn’t know existed until after college, and now I see them humping around all the time.

I think the fact that Florida is a bunch of fragments pieced together by swamp makes it a naturally compelling place. I mean, you can’t say for sure what’s going to crawl out of the sewer next.

A: I’ve just finished a novel that only briefly takes place in Florida, but deals with a lot of the same elements you’ll find in Dead Aquarium, only this time I navigated through baseball, and what it would mean if Major League Baseball were to disappear.