Maggie Gee is the author of the new novel Virginia Woolf in Manhattan, which features the writer Virginia Woolf living in present-day New York. Another of her novels, Blood, will be published in the United States in July. She has written 13 previous books. She is Professor of Creative Writing at Bath Spa University, and she lives in London and Ramsgate in the UK.

Q: How did you come up with the idea of a novel about Virginia Woolf set in New York in the 21st century?

A: Like Angela, the writer-narrator of the novel (who’s not like me in any other respects, honest!) I went to New York to look at Woolf’s manuscripts in the Berg Collection private room in the New York Public Library. I was so excited.

But when I sat down in this red womb of a room, the librarian told me I could only access Woolf’s work on microfilm – the actual manuscripts were “too valuable.”

The disappointment! I had travelled thousands of miles and wanted to be close to something the actual physical Virginia had touched. But being blocked or frustrated produced a surge of creative energy.

I thought, “Is this the beginning of a novel? I am sitting here longing for Woolf, in a room which contains the walking stick she left on the banks of the River Ouse when she drowned herself. What if my longing produced the real-life Virginia, slightly damp, back from the dead, in this room? She would seem bizarre to say the least, and have no membership card – would the librarians recognise her, or more likely, evict her? Then what would happen? What would she make of rich, rushing 21st century New York? How would she come to terms with her own suicide? What would it feel like to wake up with all the people you’d know and loved dead? On the other hand, wouldn’t someone who was so curious, and loved life so much, be tremendously happy and excited to have a new world to discover…?” And I was away. 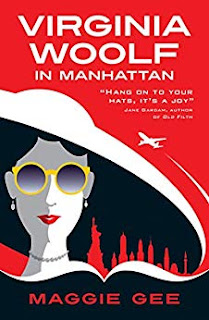 Q: What do you see as some of the reasons why Virginia Woolf and her books are still so fascinating to many people?

A: She dared to write anything she wanted, inspiring us who follow. That confidence came partly from her privileged literary background as the daughter of Leslie Stephen, the most prestigious Victorian man of letters, true.

But let’s rejoice because that helped her to write, and publish, extraordinarily innovative novels and short stories in a huge variety of forms, plus letters and a diary full of fun, warmth, brilliantly clear descriptions of her times and also an honest insight into the mind of a great writer who wrote every day.

She equalled the work of male contemporaries and indeed outdid them as she tried to catch the texture and grain of consciousness rather than building solid stage sets with predictable characters.

She was a great campaigner for women and against war in short, readable works like A Room of One’s Own and Three Guineas.

Maybe she also fascinates us because of her beauty and bisexuality.

Q: Did you try to write the novel in a style that reflects Woolf's at all?

A: Virginia Woolf is one of the three main characters in this novel, so I had to try to “think through her consciousness” and write in rhythms and imagery that would be plausible for her. At the same time it’s the freedom of writing as myself that I love.

Fortunately, I had read and re-read Woolf many times over the years, as the first main author in my Ph.D., for example, and of course, before writing this book.

It was not hard for me to inhabit her voice, though it was daunting to think what Woolf scholars might say. So far they have been kind. I just had to put all her books firmly away and free myself to become her.

Q: What did you see as the right blend between the actual Virginia Woolf and your fictional character?

A: See above. And at least, unlike novels which recreate her in her own time, I was not potentially muddying the historical facts for the reader. 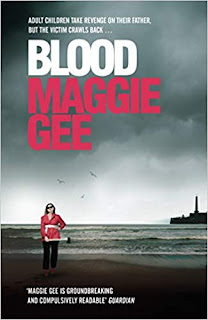 Everyone knows that Woolf is NOT alive in 2019, is NOT leapfrogging fire hydrants in New York, trying to open a laptop with a fruit-knife, drinking in the Algonquin or taking Turkish lovers – all the things I had enormous fun letting her do.

A: My black comedy thriller Blood was published last month in the UK so I am busy doing publicity for that. It will be out in the US in July.

However, to my joy I have (only three days ago!) managed to return to the draft of my next novel, The Red People, which also has elements of time travel, though it’s much more of a fairy-tale.

Recent scholarship has proved that Neanderthals were not brutes but probably as clever as us: they cooked shellfish, possibly made jewellery and clothes, and interbred with homo sapiens.

I’m very interested in prejudice – surely the way we patronised or simplified earlier humans was very similar to xenophobia and racism? – i.e., some individuals need to see modern humans as the pinnacle of creation, brighter and better than others.

So in my gentle tale, an increasing number of Neanderthals turn up in my own seaside town, Ramsgate in Southeast England. How the “natives” deal with the Neanderthals, how some try to understand the incomers and others dislike or fear them, will play out in a very short book which has humour and values kindness, self-sacrifice and heroism – for me, the great virtues.

A: Andrew Davies, the brilliant adaptor for TV of Pride and Prejudice, War and Peace, and Les Miserables, has written a lovely screenplay for my Virginia Woolf in Manhattan, not yet in development.