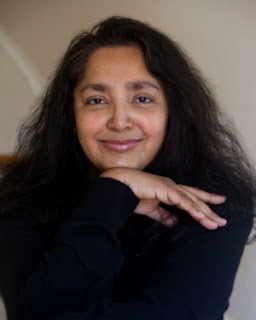 Chaya Bhuvaneswar is the author of the new story collection White Dancing Elephants. Her work has appeared in a variety of publications, including Tin House and Michigan Quarterly Review. She is also a physician.

Q: Over how long a period did you write the stories in this collection?

A: Definitely a few years for the total sum, though some stories were written over a slightly longer or shorter period of time.

Q: How did you select the order in which the stories appear?

A: I worked on this as I would put together a list of songs - very instinctive but then revising critically, taking out, putting in, etc. It was collaborative with the publisher. 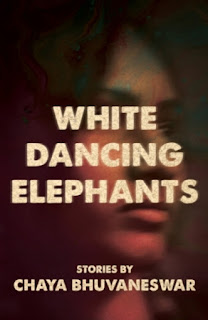 Q: How was the book's title (also the title of the first story in the collection) chosen, and what does it signify for you?

A: It's a Buddhist image, a South Asian image, but also resonates (I hoped) with the dream the narrator of the title story has, juxtaposing Disney elephants with far different imagery.

Q: Do you see certain themes running through the collection?

A: Loss, grief; what the Kirkus reviewer called "the aftermath" - definitely a state of being that all the characters face in one form or another.

A: Two novels, one of which has a lot of research underpinning it for the past two decades, much of which, as Min Jin Lee did for Pachinko, I had to throw out and start fresh with! But I have realized once you give in to the novel's process, it's like no other. Really exhilarating to have both depth and tension pulling you to the page.

A: I am on Twitter and hope so much your readers will consider following me: @chayab77.

Also I would love to hear from readers via my website including to come visit book clubs, which I've begun to do and love doing!