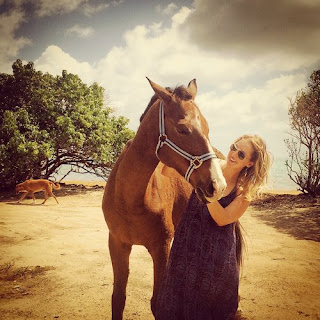 Katharine Smyth is the author of the new book All the Lives We Ever Lived: Seeking Solace in Virginia Woolf. It focuses on Virginia Woolf's novel To the Lighthouse, and also on the death of Smyth's father. Smyth's work has appeared in a variety of publications, including Elle and The Paris Review. She has taught at Columbia University, and she lives in Brooklyn.

Q: You note that you had a "true epiphany" when you realized To the Lighthouse "shared an almost eerie number of parallels with the story that I sought to tell." At what point did you realize that, and how long did it take to write the book?

A: I realized it relatively late in the process. I started writing essays about my father shortly after his cancer returned; by the time he died, two years later and midway through my last semester in grad school, I already knew that I wanted to write a book about his life and death.

I spent over five years working on a manuscript that had nothing to do with Virginia Woolf or To the Lighthouse, a more traditional grief memoir that was ultimately rejected by publishers who were encouraging but worried about its salability. It was my agent, Anna Stein, who eventually suggested I find some kind of framing device, which in turn gave me the idea of using To the Lighthouse as a means of organizing and better understanding my father’s story.

It was a true epiphany, as you say, and a total shock to realize that the very themes I had been tackling—grief, marriage, failure, homecoming, and the limitations of knowledge, to name a few—were also the subject of my favorite novel.

Once I had that revelation, the writing went smoothly and swiftly: I spent six months working on a proposal that sold in 2016, and I submitted a first draft to my editor roughly 12 months after that. 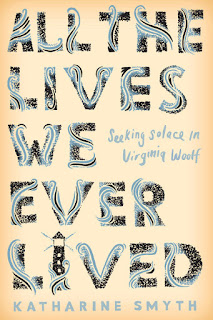 And while the decision to weave To the Lighthouse and Woolf’s biography into my father’s narrative was initially a pragmatic decision—paradoxically perhaps; as one of my former writing teachers pointed out, in what universe does the addition of literary criticism help to make a work more salable?—I genuinely believe that the result was a richer, wiser book.

To the Lighthouse not only gave me the structure for which I had been searching, but it also provided an outside perspective that helped to challenge my preconceptions and enlarge my personal experience.

Q: What role has Virginia Woolf's writing played for you throughout your life?

A: I first came across Woolf at 16, when a certain friend, whose tastes I obediently and often unsuitably adopted, thrust on me The Waves. I no doubt told her I loved it—I did love the cover—but I was secretly unmoved by that most difficult of novels, finding Woolf’s writing at once pretty and impenetrable.

So it wasn’t until my junior year of college, when I took a tutorial on her work at Oxford, that I discovered Woolf’s seemingly inimitable power to move and express me.

I returned to Brown the following year, where I dove headlong into an honors thesis about Mrs. Dalloway and To the Lighthouse; it was technically an argument for the brutality and emptiness I perceived at the center of her work—a darkness I couldn’t reconcile with the ultimately affirmative readings of most critics—but it was really just an excuse to go deeper.

But although my strong connection to Woolf helped my thesis to spring forth almost effortlessly, it became a hindrance once I graduated from college and embarked upon my own writing career.

I recently wrote an essay about this for LitHub, about the way in which, rather like Woolf’s extreme response to Proust—“such is the astonishing vibration and saturation and intensification that he procures,” she wrote to Roger Fry in 1922, “that I feel I can write like that, and seize my pen and then I can’t write like that”—my intense familiarity with her prose, once productive, had become debilitating.

And so it was that I made a conscious decision to distance myself from her work (the same distance, of course, that made it such a shock to later realize the uncanny parallels between To the Lighthouse and my family’s story).

I write about this in the book, but returning the novel after a 15-year absence has been a blessing, one that’s helped me to see it in a whole new light.

When I first read To the Lighthouse, as a moody, impressionable 20-year-old, I responded most viscerally to Mrs. Ramsay, to her glamour and her beauty; today, however, I’m equally captivated by the figure of Lily Briscoe, a character who bored me slightly on first pass, and through whom I have gained a new appreciation for the subtleties and pathos of the novel’s third section.

And I can’t wait to return to the book in another 15 years’ time, and to see the new ways in which it has grown and expanded in my absence.

Q: You've said, "I'm nervous about the idea of writing, or at least formal writing, as therapy." What impact did writing the book have on you after your father's death?

A: A lot of people have asked me if I found it difficult or painful to write about my father, and particularly about the details of his death, but on the contrary, I really enjoyed it. I suppose the one exception would be the scenes that concern his alcoholism and cruelty to my mother; writing those episodes was visceral and unpleasant, and made me feel uneasy in my skin.

But for the most part, getting to return to him on the page day after day was a pleasure and a privilege; it almost felt as if he were still alive then, as if I were getting to converse with him or return to the past. The same was true of writing the hospital scenes: strangely perhaps, my father was at his best when he was dying—the kind, gentle, funny, lovable man he had been to me in childhood—and I relished the chance spend time that person long after he had died in real life.

I think that will be one of the hardest parts of bidding goodbye to this project, not having an excuse to visit with him every day; I’ve already noticed that I dream about him less.

A: The book’s working title was My Lighthouse, which I never liked and was thrilled to have a chance to scrap; just yesterday a friend of mine who loves All the Lives was joking about how much worse of a book it would be if that were still its title.

I knew I wanted a title taken from the text of To the Lighthouse, but as rich and powerful as Woolf’s writing is, it tends to collapse and diminish when taken out of context; for instance, a phrase like “the measure of life,” which I considered for a while, is not nearly as powerful on its own as when taken in full.

When I stumbled upon “all the lives we ever lived,” I knew almost immediately that it was right.

Aside from the sheer beauty of the phrase, which is taken from a poem by Charles Elton that Mr. Ramsay recites at dinner and Mrs. Ramsay later repeats when she retires to the sitting room, I love that the words don’t actually belong to Woolf, but rather to a writer who helped her and her characters to make sense of their experience—just as To the Lighthouse helped me to make sense of my own.

The title also gets at an idea I explore at length toward the end of the book, which is the way in which seeking to know my father “not as he was to me, but to the world at large” (I’m quoting Woolf on writing about her own father) revealed a host of different Geoffrey Smyths, a man who had infinite selves and infinite lives, as I think we all do.

Finally, and perhaps most important, it evokes for me the circularity of life and death, and the way in which our dead live on in the people and places that succeed them. I see this as the only real source of solace in the face of death.

A: A novel that is still entirely in my head and thus still entirely perfect! I don’t want to say too much about it, as it’s still percolating and unformed, but I’m interested in further exploring marriage and divorce, in the way in which coupling can be a loss of self, and what happens to someone trying retrieve or reclaim that self in the wake of separation.

I’ve also been writing a lot of personal essays, some of which are tangentially related to All the Lives We Ever Lived, and others not at all. Indeed, I have an essay coming out in Elle about a near-fatal car accident that I was in in the fall of 2016, and it felt so freeing and exciting to be writing something that wasn’t about my father or Virginia Woolf (and only tangentially about death!).

A: One theme that it was particularly important for me to explore in this book was the fickleness of grief, and the seeming insufficiency of my emotions as I faced my father’s disappearance. I had spent half a lifetime believing that his death would devastate me, but I was soon forced to reckon with the bewildering fact that, as it turned out, my grief was as fickle as weather, sometimes fierce but most often mild and subdued.

But while this muffled, nebulous experience was utterly different from the shattering yet coherent event that popular culture had led me to expect, it was incredibly similar to the capriciousness of Lily Briscoe’s grief in To the Lighthouse, and to Virginia Woolf’s autobiographical writing about her own mother’s death. And that was something I was determined to unpack, for it was these portraits of mourning that ultimately helped me to accept the nature of my own bereavement.

I think we have become invested in the idea that grief has on us an unconditional impact, that it alters and explains us at the same time as it brings us to our knees; Woolf’s far more nuanced portrayal, which acknowledges the frustration, inconstancy, and even boredom of grief in addition to its horror, provides a much-needed correction to that narrative.