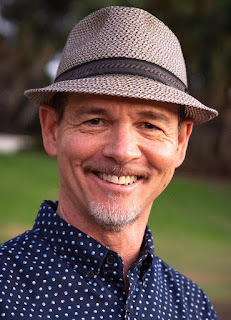 Bruce Hale is the author of Switched, a new middle grade novel for kids. His many other books for kids include the Chet Gecko series. He lives in Southern California.

Q: What inspired you to write Switched, and how did you create your characters Parker and Boof?

A: The inspiration for Switched came from my late dog, Riley. We were taking a walk down a canyon one day, I let her off-leash, and she promptly disappeared into the bushes. When I called for her, Riley conveniently developed a hearing problem (as dogs do).

Since I couldn’t penetrate the bushes, I waited for her to emerge, all the time wondering what she was getting into. Was she rolling in the remains of a dead skunk? Eating raccoon poop?

My mind instantly jumped to “What’s the worst thing she could be ingesting?” And the answer came: Dragon’s blood. Every fantasy reader knows it has magical properties, so what if Riley lapped some up and could suddenly talk?

That got me musing. By the time we returned home, I had hatched an idea for a high fantasy, boy-and-his-dog story.

Unfortunately, the story refused to gel. I brainstormed for a couple of months, but eventually hit a roadblock.

When I looked back over my notes, it was clear that the high fantasy element wasn’t working, but one piece of the story — where the boy and dog are cursed by a sorcerer and their souls switch bodies — seemed to hold promise. I jettisoned the rest of the story and focused on that.

From the start, I pictured an out-of-control dog, much like Riley when she was a puppy or the goofy goldendoodle who lived across the street from us.

Then I thought, “What kind of character would be most disturbed by that dog’s behavior?” An image sprang to mind of fussy Niles, the neat-freak younger brother in the old Frasier TV show.

From there, I talked with a psychologist friend and learned what kind of event would push a kid into that sort of borderline-obsessive behavior.

Of all his ideas, the one that resonated the most with me was that the character had lost someone close to them and was dealing with the grief by trying to control his environment and obsessively cleaning.

Bingo. I decided my main character had lost his beloved grandmother and was having trouble accepting the loss. Being a longtime jazz fan, I called him Parker (after saxophonist Charlie Parker), and the story was on its way. 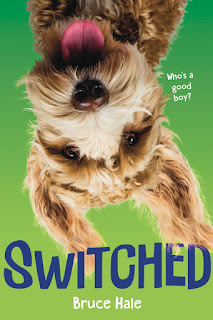 A: When I’m working on a book, most of the major shifts happen at the brainstorming or plotting stage, rather than during writing. This book was no different. The ending didn’t change, but some of the earlier plot pieces did.

For example, initially I’d thought that a mischievous pixie would cast a curse on my leading characters, but when I ran a copy of the summary past my agent, he recommended finding a transformation method that tied in more closely to the rest of the plot.

Given that recommendation, I quickly decided that a gift from Parker’s late grandma would be the change agent. Comments from my beta readers suggested other changes.

As for the ending, I knew that Parker and Boof would be restored to their own bodies, but I didn’t know quite how that would happen.

When I plot, I generally figure out the ending and the first three-quarters of the book, then leave a piece of it un-plotted so I can discover it while writing. And that’s what happened this time around — the characters told me how to get to the ending.

Q: Do you have any other favorite books about characters who are switched?

A: Surprisingly, I don’t. However, I do love the remake of Freaky Friday, with Lindsay Lohan and Jamie Lee Curtis.

A: I hope they’ll be reminded that life is messy, that sometimes you’ve just got to embrace the mess and let it be, and that while we’ll always miss loved ones who die, we can eventually move beyond the grief.

But ultimately I believe that each reader will find in the story what they need to, without the author dictating a message.

In the end, I want to make my readers laugh, that’s all. If one of my books can help them find humor in a tough situation, then I feel like I’ve really accomplished something.

A: I just finished next year’s novel, Super Troop. It’s very loosely based on my experiences in Boy Scouts, and it’s heavily illustrated, which was lots of fun for me. I actually started out as a cartoonist, but these days I don’t seem to illustrate books unless I assign myself the project.

A: Next up will be a fractured fairytale, also heavily illustrated. At least, I think it will. Right now, I’m in the brainstorming/plotting phase, aka, “I can’t remember how to write a book anymore.”

This is where the self-doubt creeps in and I wonder whether I’ve got any more stories left to tell. But I know if I hang in there, this book will eventually get written. You’d think after nearly 70 books I might have learned something about the creative process — but that’s writing for you!