Jon Grinspan is the author of the new book The Age of Acrimony: How Americans Fought to Fix Their Democracy, 1865-1915. He also has written the book The Virgin Vote. He is curator of political history at the Smithsonian's National Museum of American History, and he lives in Washington, D.C.

Q: What first intrigued you about this period of American history, and why did you decide to write this book?

A: The first thing, years ago, was seeing a chart of voter turnout—how high it was in the 19th century and how quickly it crashed. It posed two questions: Why was it so high, and why did it crash? I was trying to put a human face on the statistics.

Another thing is that I started studying the era because there was an attitude growing up in the 1990s that capital-P politics was boring to people. By the time I finished the project, it’s all we talk about!

Q: What are some of the numbers on voter turnout?

A: Turnout was high in the 19th century in general. Right after the Civil War the turnout was 77 percent. And women, children, African Americans were still paying attention. The numbers only tell half the story. 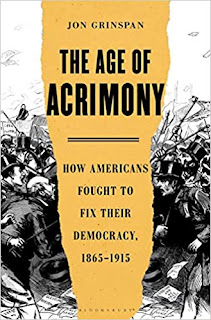 Q: Why did you choose the father-daughter pair of Will (a congressman) and Florence (an activist) Kelley as the focus of the book, and how did you research their lives?

A: I wrote my first book on young people in politics in this era. I was struck by the idea of politics as an intimate family relationship. I was especially struck by fathers and daughters. Men voted, it was a male world, but there were diaries from girls describing how their fathers explained to them if they were Republicans or Democrats.

I wanted to get from the 1820s to the 1920s, and by going from Will to Florence, it was a narrative device. Will’s papers are in Philadelphia, where I’m from. I saw letters from Abraham Lincoln, from Frederick Douglass.

They were always in the room where it happened, for 100 years of American history. They both were fascinating people, and flawed people. They were not two-dimensional heroic figures. They were difficult. They had their downsides.

Q: How would you describe the changes over the course of the timespan you write about?

A: The end of the story describes a world familiar to most Americans. The beginning of the story is so foreign. There’s so much change in politics. To get from the earlier period to the New Deal, I felt like I was on an elevator going through American history.

Q: The Publishers Weekly review of the book says, “Today’s political vitriol pales beside the 19th century’s rabid partisanship as depicted in this raucous history of Gilded Age electioneering.” How would you compare the two periods?

A: It gets me dangerously near to becoming an “it was so much worse back then” guy. We have problems they didn’t, and they had problems we don’t.

It was a more violent era than ours—the assassinations of presidents and congresspeople, labor unrest. But I live on Capitol Hill, and I was here for the riot, and as a Smithsonian curator I go all over the country. We have our manifestations of that today.

When it comes to turnout and partisanship, I don’t think we have anything on them.

The key to me is that they had these moments and found a way to reduce it. Is there a way to change or reform politics?

Q: As a historian at the Smithsonian, what do you hope people take away from your book?

A: What I always want from every project—more human engagement with the past. I’d like to get people to think more about history. History is about tradeoffs. The ability to reduce partisanship led to less participation. It’s a nuanced understanding of change.

A: When I talk about the book, there’s a tendency to discuss the structural stuff about democracy. But I’m glad we were able to talk about the human aspects. I’m glad to discuss Will and Florence. They made a big story feel human to me.