Cambria Gordon is the author of the new young adult historical novel The Poetry of Secrets, which is set in 15th century Spain. She is the co-author of The Down-to-Earth Guide to Global Warming, and she also has worked as an advertising copywriter. She lives in Los Angeles.

Q: What inspired you to write The Poetry of Secrets?

A: My husband and I, along with our youngest son, moved to Madrid for a sabbatical year. We wanted an adventure, to get out of our comfort zone in Los Angeles and have our son become bilingual.

I was working on another book when we lived there, not thinking about the Inquisition at all. Also I hadn't studied it in school for some reason.

On our first road trip, we went to Segovia, where I found plaques on the ground with Hebrew letters that spelled Sepharad. (Sephardi are Jews who came from Spain and Portugal, but the term became more widely used after the expulsion in 1492.)

The plaques were a tourist attraction to let people know Jews once lived on certain streets. But other than that, there was not a building nor a brick left.

I asked myself: What happened to all the Jews of Spain? I kind of became obsessed with trying to find remnants from that time period.

When we moved back home, I couldn't stop thinking about the rich and sad history of my people. I knew I needed to share this story with readers young and old.

A: I read all I could, both nonfiction and fiction during the time we lived in Madrid. I also visited the Extremadura region which includes towns such as Hervas, Placensia, and Trujillo that had large Jewish populations during medieval times.

The moment I saw those narrow warrens and alleyways, I started to picture a young woman walking through them. She became Isabel. 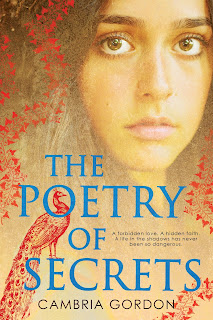 Our tour guide was of converso origin, though raised Catholic, and he knew about some wonderful hidden archeological gems. He showed us someone's private basement, with an arched ceiling and ancient floor, that had supposedly been used by a Jewish family. This is what inspired me for the Perez family wine cellar.

I think the most unusual thing I learned in my research was that in some towns, the Jews and New Christians remained dear friends. They socialized and celebrated holidays together, choosing to defy the orders of the Inquisition, despite the fact that the New Christians were conversos.

Of course this was dangerous and fraught with conflict. I played with this idea in the relationship between the Cohens and Perezes.

I also discovered that Jewish women who became widows would continue to manage the money and accounts of their husbands' businesses. I thought this was surprising, given the lack of power held by women during that time.

Q: The Kirkus Review of the book says, “This historical romance is a fast-paced, plot-driven tale with feminist main characters whom readers will root for from the very beginning.” What do you think of that description?

A: I think that's a great description. Feminism is definitely one my favorite themes to write about. In the Iberian Peninsula of the middle ages, most women couldn't read and write, and the few who did tended to be Jewish.

This was never more apparent in the years 1100-1400 when Spain was under Moorish rule and Jews, Muslims, and Christians lived basically harmoniously. Jewish girls could sit in on tutor sessions with their brothers and learn to read and write in Arabic, or they were taught by their fathers.

This all changed during the Reconquista when the Spanish Crown and Church took back control of the country. Nobles ruled private society and lettered women were frowned upon.

Isabel is a vestige from that earlier golden age, as is her grandmother. Not only does Isabel attend poetry readings but she also studies the ancient scriptures of Talmud with her abuela, both forbidden acts.

Isabel and her sister, Beatriz are strong, young women who ultimately defy society's expectations for them. Beatriz's route is more circuitous, because when we meet her, she is a rule follower and the perfect Christian.

Another powerful female character is Isabel's friend, Atika, the Romani who can't read, but memorizes the poems she writes and becomes central to the plot after Isabel's capture.

Q: Did you know how the novel would end before you started writing it, or did you make many changed along the way?

A: Usually when I write, I have an idea of where I want to end up. I had played around with a much bigger trajectory for Isabel.

I thought about basing her on a real-life heroine, Gracia Mendes Nasi, a converso who married a wealthy spice trader and used that money to create an underground railroad to help Jews escape from Portugal to Italy and Tukey.

But when I decided to make Isabel a poet, I realized that her legacy was one of words, not of rescuing other Jews.

Also, Gracia lived in the mid-1500s and I liked the idea of telling a story on the eve of the Inquisition, when everything still felt safe. It was more interesting to have history unfold and have the characters and reader discover it together.

I did, however, write the story with a very different ending in mind for the romance. My wonderful editor gently suggested I change it. But no spoilers here. You'll just have to read the book to find out what happens!

A: It's a young adult historical fiction novel set during the 1820s in Berlin. The Romantic era was lush with music, art and poetry. It's a story of the real-life sister of a famous music composer and imagines a history where she achieved the recognition she deserved.

A: I'd just like to point out that there is a connection between 15th century Spain and what's happening in the 21st century. Being "the other" is still painful. Identity politics and oppression are happening on the streets of America.

There is also the fact of hidden truths. Isabel and her family are Crypto-Jews, who choose to practice their religion in secret. How many cryptos are walking among us today, who are too scared to reveal their gender identity or even their politics for fear of repercussions? It's something to keep in mind when we read historical fiction.

Unfortunately, there is still much work to be done to eradicate hate.