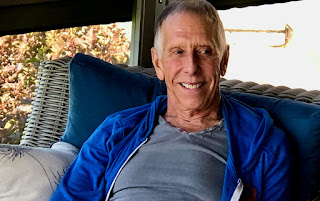 Richard Alther is the author of the new novel Bedside Matters. His other books include Roxie & Fred. Also a painter, he lives in California and Vermont.

Q: What inspired you to write Bedside Matters, and how did you create your character Walter?

A: The inspiration to write my latest novel, Bedside Matters, was prompted by a life-long intrigue with our mortality. Immersed in literary fiction as a student and thereafter, dying and death were very often woven into stories, but not specifically isolated, usually layered within the plot and other ideas. Tolstoy’s The Death of Ivan Ilyich is a rare exception.

I wanted to take a laser focus onto this most universal of experiences with a lone individual. I chose to have only my protagonist Walter’s be the singular point-of-view; he reacts to others but we don’t go inside their heads.

With each of my novels I’ve explored an issue compelling me. In this case, our culture is based upon denial of death. It’s the last thing we want to talk about. Life is for the living, and rightly so!

But people are often unprepared for the inevitable, not just those dying but their loved ones as well, saddled with undue grief at their loss rather than a prior helping of acceptance.

Walter’s terminal illness and how he faces it is only one among countless possibilities. But as a self-made business success and clueless of most all else, family included, I wanted to emphasize the transition over his final year into a soul like all others, no more, no less, an Everyman.

This ironically heightens the journey to an expanded view of life from his constrictive one when the story begins. 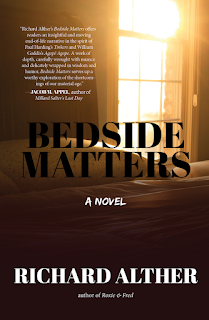 Q: The Publishers Weekly review of the book says, "With honesty and sensitivity, Alther makes this chronicle of a man’s choices examined inviting and restorative." What do you think of that description?

A: The Publishers Weekly cast of Bedside Matters imbued with “honesty” and “sensitivity” is of course flattering. I would like to attribute that to my detachment, in a way, thanks to this being my fifth published novel with three unpublished prior.

How can one write about dying right up to the moment of death? It’s a task of total imagination, so I personally could “take a back seat,” side-stepping any real-life knowledge.

Perhaps this helps to create a more believable scenario; it is true only for Walter, and based upon his life as it is told in this story.

I hope the novel is “inviting” and “restorative” because when we are able to invest ourselves as a reader in a character, suspending disbelief as it’s said, we are better able to absorb this person’s life and ideally let it resonate with our own.

Given that death is usually the last thing on our minds, this novel is a way for a reader to gently engage the topic, “try it on for size.” For me personally, in retrospect, I realized it was a sort of dress rehearsal for when my own time comes.

Q: You've said, "For both the dying person and survivors, the novel raises the choice so many eventually face: to medically prolong life, or not; to find forgiveness for oneself and others, or not; to process regrets, or not; to embrace the opportunity to be grateful, or not." What do you think the book says about end-of-life decisions, and what do you hope readers take away from the story?

A: End-of-life decisions are too often too late. In spite of living wills, “do not resuscitate” directives, loved ones usually are the first to seek a second or third opinion, the last resort of an experimental trial.

And the whole of the medical profession is geared to prolong life with whatever means until the last breath. These efforts are sometimes against the known wishes of the dying person.

We are asked to help the dying “to let go” when we ourselves, the families and friends, are in fact or in spirit suggesting the opposite, to hang on. And the will to live according to experts is extremely strong, a key component of our survival instincts.

Even religions, with all due respect, underscore the priority of life over death by promising a hereafter, reincarnation, a continuation, in a way that’s counter-productive to acknowledging life’s finality.

With my novel I was aiming for Walter to end on a note of grace; to fully embrace his impending death, to express gratitude to his loved ones, even his ex-wife who left him for being a less-than-desirable husband. He comes to see death as the other, natural part to life, enriching his appreciation for the gifts he has enjoyed.

I would hope a reader might confront and perhaps accept one’s own eventual death as a time of peace and not its opposite: clinging to life despite its impossibility.

A: I chose Bedside Matters as a title in order to avoid the notion of a story confined to a deathbed. Walter is physically confined but his mind and heart are opened to those who care for him, loved ones plus new folks, especially people far less privileged than himself. They are bedside, but so is Walter in a fashion.

Because of the secondary characters and his books, especially the poems of the 13th century sage Rumi, he is able to see himself well beyond the limitations of a dying man, immobile in bed.