Amanda M. Fairbanks is the author of the new book The Lost Boys of Montauk: The True Story of the Wind Blown, Four Men Who Vanished at Sea, and the Survivors They Left Behind. The men, from Montauk, New York, were lost at sea in 1984. Fairbanks, a journalist, has worked for The New York Times, HuffPost, and The East Hampton Star. She lives in Sag Harbor, New York.

A: I am a journalist—I’ve worked at The New York Times and HuffPost. We were living in Manhattan and in a small house in the woods of East Hampton. It sounds fancy but it wasn’t. I decided I wanted to try to work as a staff writer at The East Hampton Star.

I had a meeting with David, the editor, and he said, When can you start? In 2016 a new editor launched a magazine, East. He’s in the book—his name is Biddle Duke.

He and I were brainstorming story ideas for the magazine, and he said there’s a great untold story of the Hamptons but that he couldn’t write about it. He also told me about Mary Stedman, the widow of the young captain. It’s a story about the four men [lost at sea], but it’s largely about the survivors.

We moved to the West Coast, and were back for vacation, and I met Mary. We started talking for hours at a time. She has a photographic memory. I realized this was not a magazine story, that I was going to try to sell a book. I had always known in the back of my mind that I would write a book. I became very obsessive about finding out more. 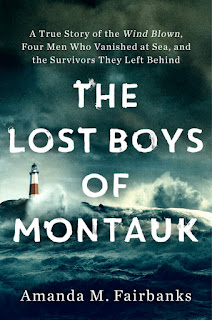 Now I get random solicitations about shipwrecks from 400 years ago, and I don’t want to write about that. It’s the living aspect, that so many people were able to share the story. That’s what drew me in.

Q: It sounds like you did a lot of interviews for the book.

A: I know how much reporting goes into a newspaper or magazine story, but this was a beast I didn’t know. I went a little overboard, but it was necessary.

It was tricky—the four men are not equal characters in the story. Not everyone I reached out to wanted anything to do with me. With Scott Clarke, you come to know him far less. I could never quite fill him in. I felt the four stories should have equal weight—they all died on the boat.

A: One of the things that really fascinates me, which is discussed in The New Yorker [issue on trauma], is the psychological element of it, the layers of a curtain getting peeled back, and the next layer would reveal itself. Trauma does a lot of things to our brains.

I’m fascinated by the way some people could recall the events like they happened yesterday, and others had blocked it out. We have the idea that memory is a concrete thing, but it’s not.

Q: What do you think the book says about Montauk in the 1980s?

A: I wish I had lived in Montauk in the ‘80s! In 1984 I was 4 years old, and I grew up in California. What I love about the story is the freedom and soul-searching the men had gone looking for. It doesn’t exist in a lot of places any more. I have reverence now for fishermen.

It was a simpler time, and there were core values we’ve drawn away from. We’ve suffered as a consequence.

A: I hope people take away the complexities of a tragedy, and how many people it affects, the ripple effect, how the whole community comes to remember this kind of event and how it becomes part of the history of the place.

Q: You’ve mentioned that you’re working on a screenplay of the book—are you also working on another book?

A: I’m working on a piece for the Times. It’s so much easier! I haven’t started yet on a book. I’m searching for that. It has to be something you want to live with for two or three years.

I don’t have a certain genre I’m interested in, but I need that spark of magic. You think a story is one thing, and it’s another world that you find. From the moment I heard this story, I felt compelled to tell it.

A: We always want to compare our books to those that went before. It’s been compared to Sebastian Junger’s The Perfect Storm. There’s an element of that, but also I’m a woman in a genre dominated by men. This is a different type of examination of the relationships between the men and their families.

It’s a story of women, of survivors, of the women left behind who make their lives work after a tragedy. Often that’s missing from stories about men lost at sea. The disappearance aspect of the story had such an impact on the survivors. They don’t have the boat itself, or the bodies of the men. It ricocheted through everyone in such a cruel way.