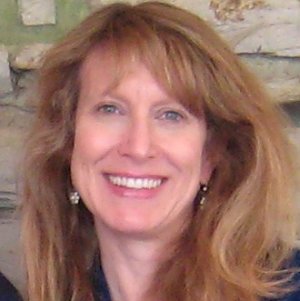 Stacey Colino is the author, with Shanna Swan, of the new book Count Down: How Our Modern World Is Threatening Sperm Counts, Altering Male and Female Reproductive Development, and Imperiling the Future of the Human Race. Colino's other books include Emotional Inflammation. She lives in the Washington, D.C., area.

Q: How did you and Shanna Swan end up collaborating on this book?

A: In July of 2017, I interviewed Shanna Swan, Ph.D., about her study showing that sperm counts had declined by more than 50 percent in 40 years in Western countries and I wrote an article about it for Vice.com.

That research went viral, grabbing headlines throughout the world, and a literary agent in New York City contacted her about the possibility of writing a book.

A mutual friend suggested that Shanna talk to me about working with an agent because she was new to book-writing.

While we were talking, she asked if I’d be interested in collaborating with her, even though the agent had a list of writers in mind; I suggested that she interview the other writers first as a courtesy to the agent then come back to me if she still wanted to work with me. The rest is history.

Q: What kind of research did you do for the book, and did you learn anything especially surprising?

A: We did a LOT of research for the book, looking at studies about fertility trends throughout the world, the influence of lifestyle factors on reproductive health, the effects of numerous chemicals that are ubiquitous in our daily lives on reproductive development and health, and how these changes can have long-term effects. 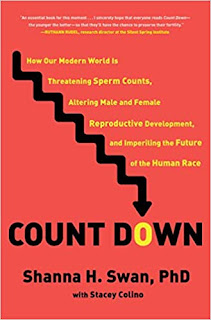 We also interviewed various scientists, doctors, environmentalists, demographers, and men and women who had experienced some of the reproductive changes we address in the book.

One of the most fascinating bits of research I did was to go to the Fairfax Cryobank in Philadelphia to interview the director about changes she was seeing at the sperm bank; while I was there, I was able to look at healthy vs. unhealthy sperm samples under a microscope, which was amazing.

Among the surprising things we learned in our research are that a significant proportion of the decline in sperm counts occurs in the womb—before a male baby is even born!—because of chemicals the mother-to-be is exposed to.

The worst offenders are endocrine-disrupting chemicals (EDCs), which are basically hormonal hijackers because they alter the levels or accessibility of testosterone, estrogen, and other chemicals in our bodies.

Also, several of these reproductive changes—the decline in sperm counts and testosterone levels, the increase in testicular cancer and miscarriage rates—are occurring at the same rate of 1 percent per year. That can’t be a coincidence.

Q: In a New York Times review of the book, Bijal P. Trevedi writes, "If you’ve smugly enjoyed the dystopian worlds of 'The Handmaid’s Tale' (where infertility is triggered in part by environmental pollutants) or 'Children of Men' (where humanity is on the precipice of extinction) — and believed that these stories were rooted firmly in fantasy — Shanna Swan’s 'Count Down' will serve as an awakening." What do you think of this description, and what do you hope readers take away from the book?

A: Bijal’s description is quite apt and I appreciate it.

My hope is that by reading the book people will become aware of these hidden threats to their own reproductive health as well as the reproductive development of their children and future children—and take steps to eliminate or mitigate these harmful influences.

The keys are to modify their lifestyle habits (e.g., quitting smoking and binge-drinking) and reduce their exposure to problematic everyday chemicals (by getting rid of plastic food-storage containers and water bottles, avoiding products that have artificial fragrances like air fresheners, and making smart choices for personal care products (by reading the ingredients labels).

The book is filled with specific advice for how to do all this and more.

Q: The book's last chapter is called "Envisioning a Healthier Future." What do you see looking ahead when it comes to the impact of chemical exposures on human fertility?

A: It’s not a pretty picture. Right now, the onus is on us, as individuals and consumers, to take steps to protect ourselves from these sneaky chemicals. And while we can do that to some extent, it shouldn’t be this way.

Many of these chemicals shouldn’t be allowed on the market in the first place.

People don’t know that unlike drugs, which must have a proven record of safety and efficacy before they’re approved, chemicals are presumed to be safe until problems are found once they’re in widespread use.

Then, it becomes a major challenge to have them banned or removed from the marketplace. It’s a messed up system, to be honest.

What we really need are better testing and regulatory systems to prevent potentially harmful chemicals from entering our lives. As it is now, we’re basically doing uncontrolled science experiments on ourselves because we’re exposed to so many different chemicals on a regular basis without knowing how they affect our bodies.

A: After researching and writing this book with Shanna Swan, I have made changes in my family’s home to try to reduce our body burden from endocrine-disrupting chemicals (EDCs). And I have urged friends and loved ones to do the same.

It may seem like a daunting proposition so I encourage people not to let perfection become the enemy of good in this respect. Every step you take to reduce your exposure to EDCs is helpful and these changes add up over time.