Julie Mayhew is the author of the new novel Little Nothings. Her other books include the novel Impossible Causes. Also a journalist and screenwriter, she lives in Hertfordshire, England.

Q: What inspired you to write Little Nothings, and how did you create your character Liv?

A: I’d been skirting around this subject for a while – the insidious flipside to sisterhood – but it’s a difficult theme to write about without seeming negative about all women.

Female friendship can be wonderful, enriching, life-changing, but the payoff to that is when it turns sour, the pain is extreme. As Liv (and science) says, this isn’t imagined pain, nor metaphorical; when you’re excluded by a friendship group, your brain lights up exactly as it would if you had been physically injured.

And many people have been floored by this pain, I realised, once I started talking about my own experiences of being excluded. It’s an embarrassing thing to say – I’ve been rejected and I’m really hurt – shameful even.

Liv’s story is hopefully a darkly cathartic one. She refuses to be the passive, innocent victim within a friendship group turned toxic; she dares to ask what part she played in her own exclusion, and this empowers her. That’s not to say Little Nothings is a how-to guide. Far from it! It’s probably best read as a warning – a how-not-to guide, if you like.

Q: The writer Sarah Naughton said of the book, “Little Nothings delivers some searing and uncomfortable truths about motherhood and female friendship.” What do you think of that description?

A: I think Sarah might have been to some of the same mother and baby groups as me!

There is an assumption, which Liv expresses in the book, that once you have a baby you will automatically be friends with all the other mothers, which of course, is ridiculous and reductive. You need to have coffee with a lot of frogs (to wrangle the saying) before you find the perfect women to keep you company through the hard work of the baby years.

What Little Nothings also tackles is what happens to those deep, all-consuming friendships once your children grow up and go to school and your world view broadens. Some people are supposed to be in our lives for short, defined periods, but we tend to cling, nostalgic for what our friendships used to be. Liv is absolutely guilty of this – with catastrophic consequences. 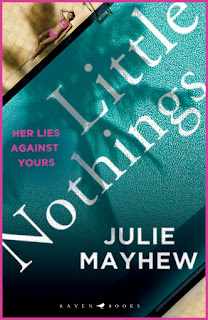 Q: The novel is set on a Greek island. How important is setting to you in your writing?

A: Many of my books take place on islands, or else in enclosed communities, places with their own particular culture and rules. Trapping characters brings out their extremes.

The cast of Little Nothings are effectively double “trapped” - within the confines of a holiday resort, and then within the island itself.

In a setting like this, with little else to worry about, their small concerns become big, amplified by booze and heat, and by that feeling of freedom a holiday gives you – the sense that you could become someone completely different, once removed from the petty day-to-day demands of your usual life.

I’ve visited Corfu twice and, on my last visit, I had a run-in with some snakes while hiking in the mountains. This led me to discover that the deadly nose-horned viper lives on the island. Terrifying! But also the perfect metaphorical gift. These snakes and the women in Little Nothings behave in the same instinctual ways.

A: I always knew the scenario of the ending, but not the outcome. That kept changing. I wrote the first draft at the start of the lockdown when a strong sense of community and “we’re all in this together” was playing out across my social media. It felt wrong to write a “nasty” book, so I pulled all of my punches.

Then my agent reminded me of the huge satisfaction readers get from deliciously awful characters doing the terrible things we never would, and I sat down to write a truly brutal second draft. I think I needed to play out those two extremes to arrive at the ending I have now, one that felt authentically Liv, both rewarding to the reader and meaningful.

A: Lots of things! I have an original TV thriller in development set in the wilds of Swedish Lapland, and I’m working on the early drafts of a funny screenplay about death.

I’m also just about to return to the boxes and boxes of research I’ve accrued for my first nonfiction book. It’s about a British silent movie actress who lost her career because of her working-class voice, but that’s not the whole story…

A: Like Liv, I was mortally embarrassed as a child when I was forced to play the game Squeak, Piggy, Squeak at a birthday party with a load of kids whose names I didn’t know. But I didn’t bite anyone. Honest.