David Talbot and Margaret Talbot, a brother-and-sister writing team, are the authors of the new book By the Light of Burning Dreams: The Triumphs and Tragedies of the Second American Revolution. David Talbot's other books include The Devil's Chessboard. He is the founder of the magazine Salon. He lives in San Francisco. Margaret Talbot also has written the book The Entertainer. She is a staff writer at The New Yorker, and she lives in Washington, D.C.

Q: What inspired you to write By the Light of Burning Dreams?

A: The idea for the book came from our editor at HarperCollins, Jennifer Barth. Originally, David was supposed to write the book on his own. But then, in fall 2017, he suffered a stroke. He asked Margaret if she would collaborate with him, not knowing how long -- or even if -- he would recover sufficiently to complete the book.

Fortunately, David did heal over time and the collaboration turned into a creative family project, even roping in Arthur Allen, Margaret's talented husband, to write the chapter about the United Farm Workers movement.

In a way, the delay in the book's publication has made it even more timely, as a new generation of activism has come powerfully alive. Hopefully our compelling stories from a past revolutionary generation will help guide the current wave of dissent.


Margaret: I was happy to jump onboard not only for the chance to collaborate on a family project, but also because I’m very interested, as a writer and reader, in stories about how people step out of their ordinary lives and make the decision to become activists.

Q: The Publishers Weekly review of the book says, "Charismatic but flawed figures dominate this vibrant portrait of 1960s radical movements." What do you think of that description, and how did you select the figures to profile in the book?

A: The PW quote does accurately reflect our "warts-and-all" approach to profiling the radical heroes of the 1960s and '70s.

Our portraits of these courageous men and women aim not only to be inspirational, but unflinchingly honest. These leaders were indeed flawed humans, and the tasks of moving America forward were daunting -- made even more difficult by the repressive and even violent counter-measures taken by federal agencies and local police.

We chose a range of revolutionary leaders to represent the full spectrum of rebellion during these years, including Bobby Seale and Huey Newton of the Black Panthers; Cesar Chavez and Dolores Huerta of the United Farm Workers movement; Dennis Banks, Russell Means and Madonna Thunder Hawk of the American Indian Movement; Tom Hayden and Jane Fonda of the Vietnam peace movement; and Heather Booth and the women of Jane, the underground feminist abortion clinic -- and others. 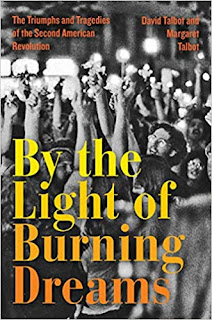 A: One of the things that jumped out at us during our research was the extent to which these leaders and movements collaborated with one another.

In fact, at the end of his life, Martin Luther King Jr. was trying to pull all these dissident strands together in one powerful movement as he prepared to occupy Washington during the Poor People's March of 1968, which was aimed at forcing Congress to divert spending from the Vietnam War to urgent domestic needs.

Black Panther leader Bobby Seale revealed to us that King even reached out to him, and Bobby enthusiastically agreed to ally the Panthers with King. Then, of course, the civil rights leader was assassinated, and his dream of one big radical movement died with him.

Margaret: I would agree with that and add that it was very striking to me how many of the movements we wrote about—the antiwar movement, women’s liberation, the farmworkers’ struggle, gay rights—were seeded by activists who had cut their teeth in the civil rights movement.

That included many white activists who had had formative experiences as volunteers during the 1964 Freedom Summer in Mississippi, where they learned to be organizers and developed a visceral, emotional sense that there were unjust laws worth defying.

A: David came up with the title, and he's not even sure how it popped into his head. He'd say it was a stroke of genius -- but he's reluctant to use the word "stroke" these days.

In any case, the title signifies for us the impossible stretch of these revolutionary leaders' ambitions for America -- for humanity, really. Their "burning dreams": for peace, justice and equality still illuminate the country's current struggles toward our better angels.

A: David is mercifully taking a break from writing after publishing six books in 14 years (whew). One of his books -- The Devil's Chessboard: Allen Dulles, the CIA and the Rise of America's Secret Government -- has been optioned in Hollywood. And who knows? It might actually make it onto the screen.

Margaret: I continue to work as a staff writer at The New Yorker, where I’ve been reporting about politics and culture since 2004, and feel very lucky to be. No new book ideas yet, but I’m always on the look-out.

A: We hope the book sparks a dialogue, particularly with today's younger generation of activists -- including our own children.

As we write in the introduction, we don't subscribe to the "great man" theory of historical change because history is moved forward by countless people, most of them unsung.

But we do believe in the importance of visionary leadership, which is not widely valued these days. We need to keep our leaders accountable, but we also need to value and protect them.