Scott Borchert is the author of the new book Republic of Detours: How the New Deal Paid Broke Writers to Rediscover America. It focuses on the Federal Writers' Project during the Great Depression. A former assistant editor at Farrar, Straus and Giroux, his work has appeared in a variety of publications, including Southwest Review and Monthly Review. He is based in New Jersey.

Q: You note that you discovered books from the Federal Writers' Project in your uncle's house. What initially intrigued you about them, and at what point did you decide to write this book?

A: When I learned about my great-uncle’s collection of American Guides, I didn’t understand the full story of how they were created, and by whom.

I didn’t know that they were part of a massive effort to support jobless people during the Depression, including artists and cultural workers, and I didn’t know that many significant American writers found jobs with the FWP.

But I was intrigued by the idea that these books—which were not only readable but surprisingly absorbing—were created by the federal government. It seemed like a highly unusual thing for the government to do in the best of times, let alone during the Depression, a moment of deep national crisis.

That was in 2005, and more than 10 years passed before I started researching the FWP in earnest. The American Guides had been hanging out in the back of my mind through those years, especially during the Great Recession, when there was a lot of talk about a “New New Deal.”

But in 2016, after a contentious election (to say the least), I found myself wondering if the American Guides held any lessons for us—if these books, products of a “New Deal America,” were still relevant in “Trump’s America.”

After all, we were still grappling with many of the same issues that the FWP reckoned with in the 1930s: periodic economic crises and extreme inequality, racial oppression and xenophobia, threats from homegrown fascists and other anti-democratic forces, along with basic questions about the role of government and how to capture, in prose, the story of America and its people.

So I started to research the story behind the American Guides and, around the time Trump was inaugurated, began to sketch out a book plan.

Q: What impact did working on the guides have on the writers you focus on in the book? 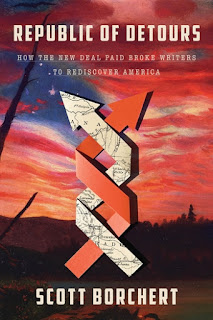 A: All federal writers benefited from the project because it gave them a sorely needed paycheck and, in one way or another, put them to work as writers, researchers, or editors. That was the basic mission of the FWP: to provide economic support and to conserve, or even foster, the skills of jobless writers and other white-collar workers.

The specific writers I focus on, though, joined the FWP at different stages of their careers, so they all experienced things differently. (Some of them didn’t work on the state guides at all, or not directly, but instead focused on collecting folklore or individual life histories or the testimonials of formerly enslaved people, among other tasks that the FWP carried out.)

Zora Neale Hurston, for instance, was already a well-established writer who’d published most of her finest work, although she didn’t always get the recognition—and certainly not the monetary reward—that she deserved. The FWP probably benefited more from her participation than vice versa.

Younger writers, such as Richard Wright and Nelson Algren, were able to hone their reporting and editing skills while working for the FWP; Wright, along with some others, was even able to focus on his creative writing through a special arrangement in the New York City office.

It’s my impression that the FWP put many younger writers into close contact with their communities—allowing them to see, in detail, how people lived out their daily lives, what kind of language and expressions they used, how they remembered the past, and so on—and that this left a lasting mark on the tone and content of the work these younger writers went on to produce.

There were also mid-career writers such as Vardis Fisher, a novelist from Idaho, who ended up becoming the director of the project in his state, and whose later work involved a shift toward deeply researched historical fiction that, I think, shows the impact of his time with the FWP.

Along with these writers and a few others, I tell the story of Henry Alsberg, the FWP’s unlikely director, whose role in the project ended up being the work of a lifetime.

A: The title doesn’t come from any FWP literature—I made it up—but it’s meant to convey something about how the project approached the task of creating a national portrait.

In a way, the FWP’s mission was pretty simple: put jobless writers to work and create some straightforward, unoffensive, practical guidebooks for travelers.

But, in practice, this mission became much more complex, and the American Guides ending up being much richer, more surprising, and more expansive than anyone could have imagined.

If the FWP ultimately created a portrait of America, then it’s a shaggy, rambling, unfinished one—the portrait of a republic assembled out of many pieces, especially forgotten or ignored bits of history, lore, and the everyday experiences of diverse groups of people, including those who were excluded from positions of official power.

The detours, you might say, are the point, and the key to a certain understanding of America. And, like the American Guides, my book takes quite a few narrative detours as well, into the biographies of federal writers and the fraught cultural context of the FWP, among other areas.

Q: In the book, you ask whether there should be a new Federal Writers' Project today. What might be some of the pros and cons?

A: People have called for a new FWP at various points, but such calls have increased tremendously since the onset of the covid-19 pandemic.

And I agree that we need a robust, expansive federal jobs program—a new WPA, or something like it—which ought to include support for writers and other cultural workers. (Performing artists in particular have seen their livelihoods decimated by the pandemic, for obvious reasons.)

As in the 1930s, a new WPA would provide decent-paying jobs for people who need them, and would carry out beneficial projects that aren’t likely to happen otherwise (such as repairing infrastructure and taking steps to address climate change).

A new FWP could take up all sorts of valuable tasks: researching local history, documenting daily life, preserving rapidly eroding (and newly emerging) folkways, providing education for children and adults—not to mention producing new publications that, like the original American Guides, would enrich our national literature.

But there are risks and challenges involved with launching a new FWP. For all the similarities between our contemporary moment and the 1930s, there are some extraordinary differences.

Far more people today have the sort of writing-adjacent, white-collar jobs that might qualify them for spots with a new FWP—should they all be considered, as they were in the 1930s, or should positions be reserved for published writers and professional editors?

How should a new FWP address the digital revolution—not just the fact that millions of people are documenting their daily lives through social media, but that published books and pamphlets now exist in a sea of websites, blogs, podcasts, tweets, and so on?

Perhaps more crucially, there’s the question of how a new FWP would survive in today’s hypercharged political climate.

The original FWP was attacked by opponents of the New Deal from the outset, and it’s easy to imagine the same thing playing out today—but to far greater, and perhaps more debilitating, extent.

The 1930s arts projects also proved to be soft targets for conservatives who sought to undermine the entire WPA and, indeed, the New Deal as a whole. I suspect the case would be the same today, especially when you consider the right’s powerful and well-funded media apparatus.

This doesn’t mean that a new FWP isn’t worth pursuing, but it’s important to see the FWP as a cautionary tale as much as a source of inspiration.

A: I’m doing the preliminary research for another book of cultural history, which seems like an abrupt shift from the subject of Republic of Detours. (I’m in the very early stages, so I can’t say much more about it.)

But it’s prompting me to think about how a group of writers, through unconventional means, ended up saying something about America—even if they didn’t necessarily intend to at the start.

A: The FWP is a vast subject, and there’s been quite a lot written about it over the last half century. I’ve included some suggestions for further reading in my book, which I hope people will explore, but I could only scratch the surface.

Anyone interested in the FWP or the other cultural projects of the New Deal will find a huge amount of rewarding material out there—including what is available in public archives, which is there for everyone to explore.

You can access some of that material online, especially through the websites of the Library of Congress and the National Archives, as well as through various archives in the states.

I highly recommend spending a few moments, or longer, exploring what the FWP left behind—and of course, checking out the American Guides, which is where my own book project began.