Simon James Green and Garry Parsons are the author and illustrator of the new children's picture book Llama Glamarama. Green's other books include the young adult novel Noah Can't Even. He is based in the UK. Parsons's other work includes the picture book Adventures with My Daddies. He lives in South London.

Q: How did you come up with the idea for Llama Glamarama?

SJG: A lot of things collided in my head at once, basically! I wanted to create a picture book about celebrating our differences where the tone was genuinely joyous and fun - a real party with music and dancing, just like Pride is.

When I then discovered that the scientific name for a llama is actually lama glama (I kid you not, how fabulous is that?!), the title and the whole premise came to me in a flash: the idea of llama who finds pride in himself, and a sense of belonging, at a huge carnival that’s full of llamas just like him!

GP: I’ve been waiting to illustrate a story about celebrating difference for a long time so when I was offered the job of working on Simon’s wonderfully joyful text, I was delighted.

Q: How did you decide on the style in which you'd illustrate the book?

SJG: I knew the illustrations needed to be as joyous and fun as I hope the writing is, but the story also requires some more emotional moments to be shown as well.

I’ve been a huge fan of Garry’s work for a long time, so when my editor at Scholastic suggested him, my immediate reaction was, “YES! YES! BOOK HIM!” and then I just kept my fingers crossed that he’d say yes! Garry always captures so much feeling, humor and utter joy in his artwork, which is exactly what Llama Glamarama is about.

GP: Larry has such a full range of emotions to express in this story I needed to find a character that was able to show feelings of sorrow and self-doubt and then turn it on its head into sheer joy, so there was quite a lot of drawing ahead of starting the book to prepare for that.

I had a lot of fun depicting him and his pals from the Glamarama, throwing the various dance moves Simon crams into the story.

One of the trickiest parts was how to show Larry's pals from the yard quizzing him about his secret night life, but still keep it light and funny. They are all friends after all, just a little tightly wrapped within their obedience of the farm rules.

So having Larry be interrogated by the glare of the torch light, surrounded by oversized shadows added a silly, over-the-top quality we all liked. And then he makes a run for it out the window! 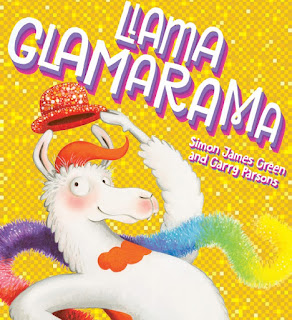 Q: What first got you interested in creating children's picture books?

SJG: Creating books that are some of the first children will experience, and which will hopefully make them into life-long readers, is a huge privilege and it’s such an honor to be able to do that.

These books also present a very unique challenge to an author: how can you tell an entire story, create characters, a bit of tension, some laughs, and a nice resolve, all in around 500 words? And in rhyme. There’s something deeply satisfying about doing that!

GP: I’ve always loved children’s books and never grew out of them. As a child I would often forgo the reading and just make up my own stories based on the illustrations alone.

The images from reading as a child played a big influence in my days at art school when I was studying painting. But it wasn’t until the final year show that I realised that what I was painting was essentially a sequence of spreads from a picture book, characters and all.

I then studied Sequential Design and turned my fine art practise into a more publishable form of illustration and this felt right for me and has done ever since.

GP: I hope children get a sense of the value of being true to yourself after reading Llama Glamarama. This story has a positive voice on many different levels. I would like it to be a book that children might recall when in adulthood as having a message that still feels right for them.

SJG: Garry and I have our next picture book, Fabulous Frankie, out in the UK in June - he’s a glittering, spectacular flamingo, who only wants to be a little more fabulous than he already is!

I also write middle-grade and YA fiction, so I’m working on a number of other books at the moment too.

GP: Simon and I have recently finished a new book together, Fabulous Frankie, about a flamboyant flamingo who takes on the world with his sewing machine, pot of glitter, and overflowing sense of style. I think if Larry and Frankie could meet they’d get on very well.

SJG: Garry and I love a bit of cheesy disco (just like Larry!) and at book events it’s not unusual to find us doing the YMCA dance. I mean, who doesn’t love a bit of Village People, am I right?!