John N. Maclean is the author of the new book Home Waters: A Chronicle of Family and a River. It focuses on Montana's Blackfoot River, which his father, Norman Maclean, wrote about in A River Runs Through It. John Maclean's other books include Fire on the Mountain. He worked as a journalist at the Chicago Tribune for 30 years, and he lives in Washington, D.C., and Montana.

Q: What inspired you to write Home Waters, and over how long a period did you work on the book?

A: A few years ago, I hooked the biggest rainbow trout I’d ever seen on the Blackfoot River in northwestern Montana, where I have fished all my life.

At first, it was just a fish story, one I wrote for an anglers club and then a magazine. But as I worked the story it brought together a lifetime of fishing, and more than my lifetime, the history of my family’s links to Montana. It became a story about the generations of my family who have fished and bonded and returned to the Blackfoot River no matter how far away we go.

It’s also an attempt to give the living a deeper sense of where they came from and a sense of optimism for what lies ahead.

I’ve been writing sketches about the people in Home Waters and gathering the family history for decades. Some of those sketches wound up reworked for the book.

This is my sixth book, and a normal one takes me about five years and overlaps with the next one by a year or two. 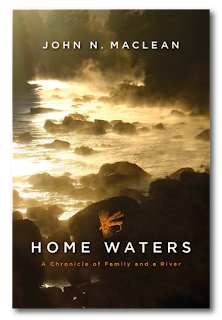 Home Waters took three years from start to publication, which is less than normal because much material was ready at hand or came from memory: one of the exceptions is the account of Meriwether Lewis’s journey through the Blackfoot Valley, and retracing and learning about that episode was a fun piece of reporting. There’s a lot of work to a book, too, that isn’t reporting and writing.

Q: What relationship do you see between this book and A River Runs Through It?

A: The parallels became apparent to me only as the original story about the big fish expanded and picked up themes and people from A River—in particular, the story of my uncle Paul’s death. His murder haunted my father and his book and has been a part of my life, speaking of parallels, and undergirds my book.

When an early reader of my book told me, “This is the backstory for A River Runs through It!” I was shocked and surprised. But it did turn out to be a companion book to A River.

By chance, at the same time I was working on Home Waters I located Robert Williams, who created the illustrations for A River back in the 1970s. Nearly a half century had passed, but I found Williams, who had retired from the University of Chicago Press, where he’d been a designer and illustrator.

He was able to answer a lot of questions, including confirming that the image on the cover of the first edition of A River, of a river running up against a high bluff, came from his imagination and is not an actual location.

Williams’s engravings are wonderfully evocative, and I suggested to my editor, Peter Hubbard, that we do the same thing for Home Waters. Peter found [Wesley W.] Bates, who has the right touch.

Q: The Kirkus Review of the book calls it "a moving memoir of a family’s love affair with the Blackfoot River in Montana." What about that river makes it so special to your family?

A: The Blackfoot used to be a remote, little known river, but the book and especially the movie A River Runs Through It have made it as legendary as Montana rivers like the Madison and Missouri, and in some ways more so. The book and movie helped spark a monumental effort to restore tributaries and clean it up to make it a fine fishery again.

For a long time, the Blackfoot was our family river. We’ve all left part of ourselves there. But the notion that it belongs mostly to us was a fiction to begin with, and doesn’t stand up to what’s happening today, the heavy use of the river that has fundamentally changed its character.

It’s very difficult to get the old feeling that the river belongs just to you. If I’m lucky and get my timing right, though, there are spots of time when I can be alone with my memories, the living throb of a big fish on the line, and be at home.

A: I hope in the short run Home Waters gives readers a lift from the isolation of the coronavirus pandemic. A lot of people have compensated during the pandemic by getting out in the natural world, looking for refuge and rejuvenation.

Home Waters affirms the values of family, place, and a connection to the workings of the earth. There are hints that as we leave the pandemic behind people are hungry for connections to those sorts of things, the stuff that truly matters. If that’s true, and if the book helps with that, I will be glad.

A: I continue work on the Yarnell Hill Fire of 2013 that took the lives of 19 members of the Granite Mountain Hotshots. It’s a very difficult project and it’s a long way from the finish line. We’ll see what happens with that one.

A: The Blackfoot River is being loved to death. There are too many floaters, too many campers, too much attention.

This is a twist, because the book and movie, A River Runs through It, at first inspired a massive outpouring of conservation dollars that brought the Blackfoot back from a severely degraded condition and made it a fine fishery again.

I hope that Home Waters supports awareness about the need to find common sense restrictions about use of the river.