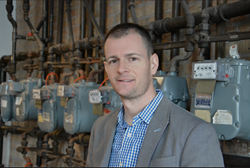 Andrew Prahin is the author and illustrator of the new children's picture book Ship in a Bottle. His other books include Brimsby's Hats. He lives in Chicago.

Q: What inspired you to write Ship in a Bottle?

A: I had a couple of images in my head. One was of a ship in a bottle, which would be a fun vessel for a little creature to be in. I toyed with different formats—who would be in it and why?

It hit me one day that it could be a character trying to escape to a better life. The idea just came to me--maybe there was a powerful story there that I could tell. The book could help kids, in a very wide way, feel empathy for fellow humans in a tricky situation.

Q: Did you focus on the text first or the illustrations first, or did you work on them simultaneously? 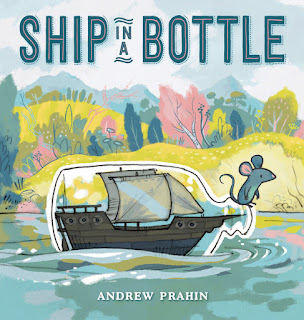 A: It’s really helpful to be the one both writing and illustrating a story. You realize as you’re working that maybe you don’t have to write those words because you could show it, or vice versa. With this book, I wrote it first.

Q: Can you say more about what you hope kids take away from the story?

A: It is a story about a refugee. I’m not sure young readers will grasp everything. I hope they take away that Mouse is a character who perseveres: Don’t give up what you seek to achieve.

Hopefully, there’s a little empathy in there as well, a sense that other creatures might be going through similar things.

A: I loved picture books as a kid. I was lucky to have parents who loaded my room up with books. I grew up with Richard Scarry and others who were good at drawing you in with pictures.

I went to college for illustration, and went into advertising. I found that creativity in the professional world could be constraining. I went into picture books because I could use my creativity on my own terms, after hours.

Ten years later, my first picture book came out. It started out as therapy.

A: I’m struggling with an idea. I have a day job and a couple of kids. My daughter has a vivid imagination and has powerful nightmares. I’m working on the theme of nightmares and how kids can deal with them. I’m working on two or three different ideas.

A: One of the things I’ve enjoyed about being an illustrator is that you can sneak some imagery in that’s meaningful to you. My wife will have appeared in all three books—she’s on a stamp decorating the wall of the bottle. There are a couple others of my kids.