Joseph Tachovsky and Cynthia Kraack are the authors of the book 40 Thieves on Saipan: The Elite Marine Scout-Snipers in One of WWII's Bloodiest Battles. The book focuses on the experiences of Tachovsky's father, Frank Tachovsky, during the war.

Q: What was the inspiration behind 40 Thieves on Saipan, and how did the two of you come to work together on the book?

JT: During my father’s memorial service in 2011, several people spoke of his tenure as mayor of Sturgeon Bay, Wisconsin.

But one man delivered a different kind of eulogy about the first time he met my father in 1955 at the University of Wisconsin in Madison, and then how he learned from a member of Dad’s platoon, Sergeant Al Yunker, how Lt. Frank Tachovsky bravely saved the lives of his platoon when an enemy tank crossed their lines.

The man was in Naval ROTC at the time, and shared Yunker’s story of Dad’s heroism with a revelation that inspired me to research and write 40 Thieves on Saipan. If a pin had dropped on the carpet, you would have heard it.

In the days following the funeral, I couldn’t get that eulogy out of my mind. I did an online search of “Tachovsky, Saipan,” which led to a Leatherneck website. Posted there was an article from the December 1944 issue of Leatherneck Magazine titled “Tachovsky’s Terrors.”

The post, by Chris Tipton, was prefaced with, “This was my father’s platoon in World War II. He said the article was all true except for a few small errors. One of which was that among Marines they were known as Tachovsky’s Forty Thieves, not Terrors.”

From there, I opened my father’s footlocker in the garage and found his platoon roster for the 6th Marine Regiment’s Scout and Sniper Platoon….and the journey began.

My co-author, Cynthia Kraack, and I first met in May of 2015, when a mutual friend introduced us over lunch at a sushi place. They were both founding members of Write On Door County. Our friend knew that I had been working on 40 Thieves and thought it would be a good idea to make the introduction.

Following our meeting I sent Cynthia an email with about 40 attachments. My early mentors were professorial types who dwelled upon minutiae, so it was very detailed and, consequently, very dry.

CK: Joseph's friend and I were founding members of Write On Door County. She invited me to lunch (not sure if it was sushi) to meet her long-time friend Joseph who had been working on a book about World War II for a number of years.

Following our meeting Joseph sent me an email with about 40 attachments--each a “chapter.” Each chapter included every detail about an event, beginning with stories about some of the men joining and training, the Battle of Guadalcanal, Battle of Tarawa, formation of the Scout-Sniper platoon, training, and the Battle of Saipan.

By detail, I mean geographical data, weather, historical information about troop movements, then paragraphs from interviews with each of the men--some in an organized format, some more free-flowing.

JT: Chris Tipton, whose father Warren had been in the “40 Thieves” platoon, recommended a website named HyperWar - USMC Monograph https://www.ibiblio.org/hyperwar/USMC/USMC-M-NSols/index.html, which was my first source material.

The platoon roster was priceless. One of the men, named Knuppel, William F, was a “Marine buddy” of my father, who I had met several times. It was early November 2011 when I arranged an impromptu trip to interview him. Unlike Dad, Bill was a walking, talking Marine Corps historian.

Lt. Frank Tachovsky and Platoon Sergeant Bill Knuppel’s tour of duty together began in 1941 when the Sixth Marine Regiment were sent to Iceland as the first U.S. forces deployed in World War II. Bill served with Frank on Guadalcanal and Tarawa, and was his platoon sergeant on Saipan.

Upon returning home, I searched every man’s name on the roster, and discovered three members were still alive: Bob Smotts, Roscoe Mullins, and Marvin Strombo. Their oral histories are the backbone of the book.

The HyperWar site was helpful in regard to generalities, but fortunately, William Jones, commander of the Sixth Regiment’s First Battalion on Guadalcanal, Tarawa, and Saipan, had written A Brief History of the 6th Marines, which was much more specific.

Battle Cry by Leon Uris gave me a wonderful sense of the tenor of the times, from one who lived it. Knuppel knew Uris, having served in the same H Company on Guadalcanal and Tarawa. 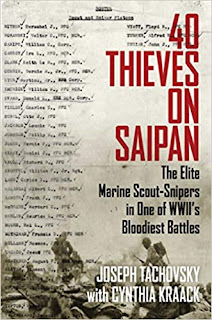 In his book, Uris writes of a notorious group of thieves within the Sixth, recounting many of their antics. I asked Knuppel if that was his platoon. He smiled and said, “Somewhat.”

Another valuable resource I found while researching at the National Archives in Bethesda, Maryland, was Colonel Riseley’s “Daily Report” from Saipan. Colonel James Riseley commanded the Sixth Marine Regiment, and the Scout-Sniper Platoon fell under his personal control.

Other useful source materials included Highpockets: The Man. The Marine. The Legend by Zona Gayle Murray, US Marine Corps Scout-Sniper: WWII and Korea by Peter Senich, On the Art of Hand to Hand: An Interview with Colonel A.J. Biddle by James N. Wright, Tarawa: The Incredible Story of One of World War II’s Bloodiest Battles by Robert Sherrod, and With the Old Breed: At Peleliu and Okinawa by E.B. Sledge and Leatherneck Magazines.

The most amazing aspect of the research process was the old Leathernecks from my father’s platoon’s willingness to open old wounds and discuss events they had spent their whole lives trying to forget.

CK: Joseph had boiled down the 600 pages of oral histories into a more manageable set of chapters with the help of a few friends. I read and reread it, then sat back to consider what was unnecessary and what was missing.

For me The Pacific provided a framework of how boys became war hardened. Battle Cry by Leon Uris, Look WWII books and a handful of Leatherneck magazines from the era helped. Eventually as we were near completion, I read Band of Brothers.

I relied on the internet to read materials from the U.S. Armed Services, veterans blogs, media coverage of battles, biographies of the Marine leadership, descriptions of tanks, rifles, munition, topography, the people of Hawaii in World War II, the history of Saipan, and the Japanese mindset. I needed to immerse myself in facts and history.

My background in journalism pushed us to validate information. I wouldn't have been able to breathe life back into these young men without my fiction-writing skill.

And my years in the creative production industry helped us prepare for a publisher's review. We had signed permission from the men or their survivors and we knew a few things about copyright and sought it for photos or images, which was all gold for a publisher.

Q: Joseph, you note in the book that your father "rarely discussed World War II." How much did you know about your father's wartime experiences growing up?

JT: I knew very little growing up about my father’s World War II experiences. The only times the war might come up as a topic was when he looked at old photographs, and then his commentary would be terse.

Occasionally, Marine buddies would surface. He golfed twice a year with “Doc” and Goodman and exchanged letters with men named “Shit-sack” Rhode and “Snerd” McIntyre. His Marine buddies were referred to only by nicknames or last names, and to them dad was “Ski.”

JT: Cynthia and I wrote the book to be sort of an Everyman’s story to make readers aware of the sacrifices that are made when one goes into combat.

It’s not just about my father’s platoon during World War II. Instead, we wanted to highlight the sacrifices made by any man or woman who is brave enough to wear a uniform in defense of our country. The book highlights how much the soldiers gave up during, truly, The Best Years of (Their) Lives.

JT: There was so much research material that went unused in 40 Thieves on Saipan that we’re discussing working on a few companion pieces. As with the 40 Thieves, much of the research has been done and material amassed, and we just need to reformat it.

JT: My father frequently said, “We don’t do enough for our veterans.” In honor of that sentiment, a significant portion of the royalties from 40 Thieves on Saipan will be donated to organizations that help our veterans.