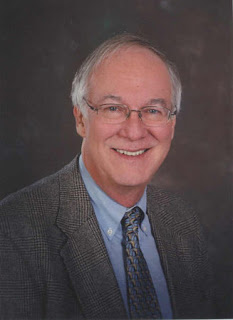 David L. Harrison is the author of the new children's picture book The Dirt Book: Poems About Animals That Live Beneath Our Feet. He is the author of 100 other books. He lives in Springfield, Missouri.

Q: What inspired you to write the poems in The Dirt Book?

A: As far back as I can remember I’ve been fascinated by dirt, or more precisely, the mysteries of dirt and what lies below the surface. Like the ocean, we know a lot goes on down there but we can’t see it.

What made the hole beside this rock? When a cicada emerges from the dirt to crack out of its shell and sing its loud mating call, where was it before it came out? What do mole tunnels look like? How do queen bumblebees pass the winter? What makes dirt in the first place?

After a lifetime of wondering, I decided it was time to write a book about it.

Q: How did you choose the animals and creatures to include?

A: In most cases, the subjects in The Dirt Book are in the book because they’re in the dirt. Some live there fulltime while others spend part of their lives there or dig tunnels in which to raise their young. 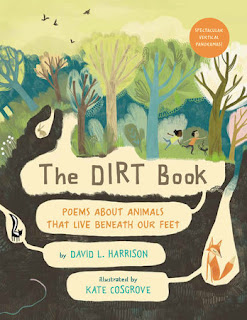 Depending on the climate, the kind of dirt, and availability of natural food, the cast of characters changes, but in general the roots and animals I chose for the book are good representatives of what we would see from a magic elevator that could take us down into the dirt for a closer look.

Q: What do you think Kate Cosgrove's illustrations add to the book?

A: Kate’s marvelous. She has just the right touch to keep it real yet colorful and exciting for young readers. By making the book a vertical format, she has room to reinforce the notion that we’re really digging down through the soil on an adventure to see what’s there. I love it.

A: Kids and adults normally take dirt for granted. It’s there. We walk on it. We drive across it and fly over it without giving much thought to what it is: a world that is home to vegetation, creatures, and forms of life nearly too small to see. Without dirt, we humans couldn’t live the way we do.

I want kids to understand why dirt is important and how it plays a vital role in life on our planet.

A: Next trade book is a simple science book for young children, written to help them understand more about how their bodies work.

A: In October, I’ll celebrate the 52nd anniversary since my first book for children – The Boy With a Drum – was published. I still work as a writer seven hours each weekday and wish there were more weekdays in a week. The Dirt Book will be my 101st book. Numbers 102-105 are in the works.