Ashraf Kagee is the author of the new novel By the Fading Light. He is a professor in the department of psychology of Stellenbosch University in South Africa.

Q: What inspired you to write By the Fading Light?

A: I wanted to tell a story about childhood, the loss of innocence and coming of age. The period of boyhood just before adolescence sets in is an interesting time and I wanted to capture a sense of that developmental moment.

I also wanted to comment on how children are often at the whim of adults who, for various reasons, conscious and unconscious, don’t necessarily have their best interests at heart.

In this story the adults are consumed with their own pain and grief and the emotional needs of these young boys are to some extent neglected.

And then there’s the time period, the early 1960s, which was just before the onset the hippie movement, the Vietnam War, the Civil Rights movement in the U.S., the Beatles, and various other cultural shifts that took place later in the 1960s.

The Sharpeville Massacre features prominently in the book, though, and is a backdrop for the story. I think in some sense the events at Sharpeville also represented a loss of innocence for South Africa. The armed struggle against apartheid began and Nelson Mandela would soon after go to prison.

So even though there are political events that are referred to, this is essentially a human story about growing up.

Q: The literary critic Michele Magwood said of the book, "Kagee expertly pulls back from sentimentality to present a moving, simmering story of loss of innocence.” What do you think of that description? 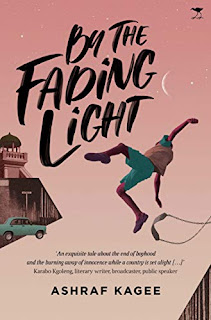 A: I think it is quite a generous comment and I appreciate it. I didn’t want to write a sob story and bore the reader.

So I tried to make it funny and a little absurd in places, to reflect some of the fun and laughter that many 11 year olds enjoy and then also suggest that things on the surface are not as they seem, that there is danger and that the world is not always a safe place.

There are some absurd moments such as the family where the three sons all have the same name because the parents are too lazy to think of different names for them. And so they refer to them as numbers, 1, 2, and 3 to differentiate among them. It’s silly but I had fun writing it.

Q: As a novelist and psychologist, how do the two coexist for you?

A: Well, I didn’t specifically set out to write a psychological book. In my day job I’m more of a researcher than a therapist.

I think novels tell a different kind of story about human beings from the formal study of psychology. A novel doesn’t have to be empirically correct. It can tell broader, overarching truths about the human condition, about relationships, about the inner world of the characters.

I also like the fact that there are no rules, and if there are, I can break them if I like. I can’t do that as a psychologist or a researcher without losing my professional credibility.

A: There were some details about historical events and music and popular culture that I needed to look up, to make sure there were no anachronisms. This is the wonderful thing about the internet. You can find almost anything.

I’m generally quite interested in world events, in the coming together of cultures, and in history and politics. In some sense this book brings together these themes but ultimately it’s a human story about the inner worlds of the characters.

I often look up the technical aspects of writing, such as words and grammar. William Strunk’s book The Elements of Style is very useful.

A: I want to try to write a book on slavery. It’s a topic that has not being given much attention in South African literature, unlike in the United States where slavery has been the topic of many books and other art forms. South Africans sometimes forget their slave history because apartheid has eclipsed so much of the national narrative.

But of course good stories are about people, their lives, their relationships, their failings and successes.

A: One of the books I like is Stephen King’s memoir On Writing. He tells the story of his own personal journey as a writer and tries to give other writers ideas about what has worked for him.

He says to be a good writer you have to read a lot and write a lot. And you have to kill your darlings. In other words, a lot of what you write is not usable so you should be ready to delete it. It’s hard, but you have to kill those darlings, those precious words and sentences that you have so lovingly crafted.

The final version of By the Fading Light is quite different from the first version, after I did a lot of rewriting and editing. It’s par for the course I guess.

I really do like witty, interesting writing and a book should want to be read. The words should leap out at the reader and say “Read me!!”. But of course that’s easier said than done.