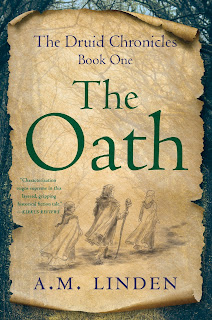 A.M. Linden is the author of the new novel The Oath. It's the first in The Druid Chronicles series. She is a retired nurse practitioner.

Q: The Oath is the first in a series. What inspired you to write The Druid Chronicles?

A: There is either a long or a short answer to this.

The long one begins begins with the Native American folk tales that my mother read to me at bedtime, runs through the works of J.R.R. Tolkien that captivated me as a teenager, and then to my belated discovery of young adult epic fantasy.

The short one is the impact that the African proverb “Until lions have their historians, tales of the hunt shall always glorify the hunter” had on me the first time I read it.

It was unquestionably this adage which inspired me to wonder how the conquest of Britain, theologically by Christian missionaries and militarily by Anglo-Saxons, may have been experienced by the polytheistic pagans who were being supplanted.

A: Having come up with the idea of writing a story about the struggles between pagan Celts and early Christian Saxons, I began my research by googling “Druid.” The result was over 40 million listings that ranged from academic treatises to internet games.

Narrowing my focus to the academic and historical pages, I used the rich online resources, as well as those of my local bookstore and library, to become acquainted with the complex interactions between these cultures and religions.

In the following years I had the opportunity and the privilege to travel to England, Scotland and Wales, visiting museums and ancient heritage sites and exploring the remains of Celtic hillforts that were being browsed by modern-day sheep.

The process of delving into the history of a time and place I’d previously only known from fiction held a great many surprises—the first of which was that Druids do not appear in the historical record beyond the first centuries A. D. and, despite their being mentioned in folklore, there is no documentation that there were any left by the time the Anglo-Saxons had been Christianized.

This potential problem for my main plotline was offset by finding out there are sufficiently large gaps in what is known about this period that there was room for me to insert my fictional cult and its priests and priestesses without anyone being able to prove that they couldn’t have been there.

Q: What do you see as the right blend of fiction and history in your work?

A: On a scale of 1 to 10, where 1 is almost entirely fiction and 10 is mostly historical, I would put my work somewhere between a 2 and a 3. There are only rare mentions of historical figures in the series, and none of those figures have any significant role in the narrative.

While I did my best to avoid anachronisms—having cottages with fireplaces instead of hearths or characters who are wearing clothes with pockets—I definitely took liberties with the landscape and put rivers in where I needed them.

At a deeper level, my characterization of how ethnic and religious divisions can be perpetuated, exploited, or overcome says more about my concerns about human behavior in my own time period than my insight into people living 12 centuries ago.

A: First and foremost, I hope that readers will enjoy The Oath and its admittedly quirky characters, and that they will finish the book wanting to find out what happens to them.

Beyond that, I frankly have confidence that readers who chose to read about Druids and Christians from the Druids’ point of view are already fully endowed with any principles of social justice that I may have tried to slip into the story’s subtext.

A: I’m finishing the fifth and final book in the series. It’s titled The Challenge, and while it’s clear how things work out for the main characters, I will admit that the challenge for me is making sure that I’ve tied up all the loose ends for the minor but still significant ones.

A: That additional information about the series can be found on the website: www.Druidchronicles788ad.com