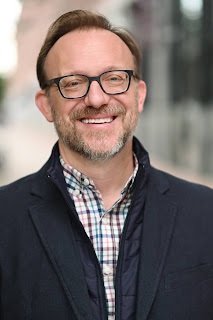 Michael Blanding is the author of the new book North by Shakespeare: A Rogue Scholar's Quest to Discover the Truth Behind the Bard's Work. His other books include The Map Thief, and his work has appeared in a variety of publications, including The New York Times and Slate. He is based in the Boston area.

Q: What inspired you to write North by Shakespeare?

A: About six years ago I was approached by Dennis McCarthy, an independent scholar who told me he had a new theory about how Shakespeare’s plays were written. While he believes that Shakespeare wrote the plays, he also believes that he based them on earlier plays written by another writer named Thomas North.

At first, I was very skeptical, but the more evidence he showed me, the more fascinated I became, and the more I thought that the world needed to hear about his ideas—culminating in this book.

A: I wanted to make the book as fun as possible for the reader, as well as for me as a writer. So I asked Dennis to travel with me across England, France, and Italy and follow in the footsteps of Thomas North, as we considered how and why he might have written the works he did. 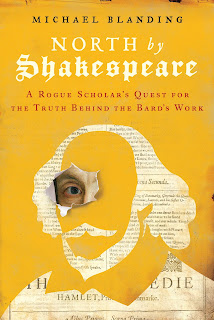 I also did a lot of my own research in the archives in London and other places in order to test Dennis’ theories.

I was surprised to learn just how little we know about Shakespeare and how what we do know about him doesn’t seem to match up with the plays—creating these mysteries that still linger today.

Q: The Kirkus Review of the book calls it “An entertaining look at a literary iconoclast.” What do you think of that description, and how would you describe Dennis McCarthy’s work?

A: I love that description! Dennis is a fascinating character—a college dropout turned self-taught scholar who has become obsessed with discovering the source of Shakespeare’s plays. Along the way, he has gone up against some powerful forces in academia that don’t want to hear what he has to say.

Many of his techniques, however, employ computer software and online databases unavailable to previous generations of scholars, that have allowed him to reveal absolutely fascinating new information that I think really needs to be taken seriously.

A: Whether or not people love Shakespeare, I hope that they find in my book a captivating narrative about an obsessive outsider exploring a literary mystery that can really affect our world.

Shakespeare’s plays have been performed, adapted, and reinterpreted for 400 years, and are such an essential part of our culture—whether it’s Romeo & Juliet turned into West Side Story or Hamlet turned into The Lion King! Knowing who wrote these amazing works of literature and why can give us new insight into these stories and explain so much we never knew before.

A: I’m really excited to promote this book, and look forward to talking about it at events both online and in-person this summer and fall—both by myself and with Dennis.

Beyond that, I have a few ideas for my next book, but nothing for certain right now. I love finding nonfiction stories I can really sink my teeth into, that have great characters with controversial ideas, and allow me to question things we take for granted.

As an investigative reporter, I truly believe truth is stranger—and more interesting—than fiction!

A: One aspect of the book that I really loved was the opportunity to delve deep into history, and intertwine the story of Shakespeare’s plays with the stories of larger-than-life figures such as King Henry VIII, Queen Elizabeth, Mary Queen of Scots, and Catherine De Medici.

It’s amazing when you look at these historical figures and then look at our political and cultural figures today and see how little has changed. We are still obsessed with the same kinds of politics and intrigues that they were 400 years ago.