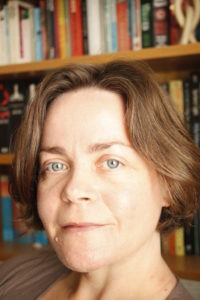 Kathryn Harkup is the author of the new book Vampirology: The Science of Horror's Most Famous Fiend. Her other books include Making the Monster. Also a chemist, she is based in the UK.

Q: What inspired you to write your new book, and how would you define "vampirology"?

A: Vampires have been stalking my life for decades. I was a huge fan of the Buffy TV series, and I read several of the Anne Rice novels.

Then, a long time ago, I heard a talk about the chemistry of porphyrins and how they made the human body very sensitive to sunlight. The talk was about 10 minutes on vampires and 50 minutes of chemistry. I thought that was the wrong way round.

When I got a job promoting science to schoolkids I wrote a talk about vampires and using the scientific method to investigate them. It was only a matter of time before I sat down to write a book on them.

I wanted to go into more detail than I ever could in my talks, to explore everything that I considered to be “vampirology,” which is pretty much anything pertaining to vampires and the study of them.

The book could easily have been a lot longer but I've tried to stick to exploring the different types of vampire-like creatures that have been described throughout history and the science behind the well-known characteristics of vampires.

Q: What did you see as the right balance between science and legend as you were writing the book? 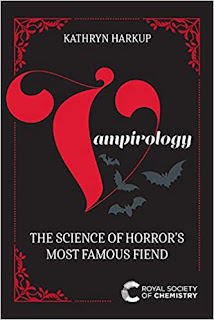 A: It's really difficult to know the right balance. I'm really interested in science, but I have also found some great stories to tell about vampires. I wanted the reader to be able to understand the science behind what might have gone on in these stories, how people in the past might have misinterpreted or misunderstood what they witnessed.

It's also a different way of looking at both science and vampires. I get to carry out all sorts of interesting thought experiments, like how a sub-species of human, homo vampiris, might have evolved, or the nutritional consequences of eating only blood.

Vampires have also become very familiar from thousands of pop culture examples, but they are actually all very different when you think about it. Count von Count from Sesame Street is nothing like Nosferatu from the silent film, but they are both instantly recognisable as vampires - I find that fascinating and wanted to explore as many different interpretations or species of vampire as possible.

Q: How did you research the book, and what are some of the most fascinating facts that you uncovered?

A: I did lots and lots and lots of reading. I have also watched a fair few TV shows, films and YouTube clips over the years, but there are so many, I've barely explored the tip of the fictional vampire iceberg.

I've loved finding out about the different vampire-like creatures around the world, from the shape-shifting soucouyant of Trinidad to the Chinese hopping vampires.

One of my favourites has to be the sampiro from Albania that are dressed head to foot in floaty diaphanous fabric and have huge eyes that glow like car-headlights through a fog. They clatter down the streets on high heels making kissing noises as they smack their lips in anticipation of their next blood meal.

Q: What do you think accounts for the ongoing fascination with vampires, and have opinions about them changed over the centuries?

A: Vampires are very adaptable to their times; they would have to be to survive so long.

In the past they were ordinary people, only recently deceased, who had returned from the dead still wearing their grave clothes to attack their nearest and dearest. They must have been truly terrifying because they were known to their victims and brought disease and death with them.

The reinvention of the vampire in the 19th century gave them a lot of sex appeal and moved them further up the social hierarchy. These vampires were very much “mad, bad and dangerous to know.”

Now vampires have superpowers as well as sex appeal, some have befriended humans rather than attacking them. Today, rather than running away from vampires, people want to be more like them. And, when they are beautiful, strong and live forever, who can blame them?

A: Right now I'm in the middle of writing another book, still full of seemingly invincible and/or beautiful people, but a bit more modern. I'm exploring the science of James Bond, the plots, the villains, the explosions, the stunts and all those extraordinary ways to die, or almost die, in the world of 007.

A: I have another book out later this year - The Secret Lives of the Elements - full of stories about 52 of the elements in the periodic family tree. It's lots of fun and there are cameo appearances from Don Quixote, Marilyn Monroe, Dr. Jekyll, and Mr. Hyde.