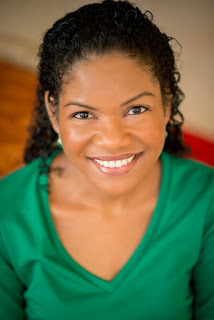 Preslaysa Williams is the author of the new novel A Lowcountry Bride. Her other novels include Healing Hannah's Heart. Also an actress, she is based in Virginia.

Q: What inspired you to write A Lowcountry Bride, and how did you create your characters Maya and Derek?

A: My inspiration for A Lowcountry Bride started with a line:

That line popped into my mind in 2010 while I was sitting on the floor of my bedroom and folding laundry. I started writing the rest of the book from that one line.

I originally envisioned A Lowcountry Bride as a lighthearted, bridal-themed romance. The deeper layers and nuances were added in during later rounds of edits.

I created Derek and Maya by interviewing them. I printed out a list of character interview questions which I now use for every book that I write. I grabbed a notebook and pen, and I asked them about their life. I wrote down the responses that popped into my mind.

From my interviews, I learned about their lives prior to beginning of the book. I also nailed down their particular fears and character flaws.

The interviews gave me enough information to know about the major turning points in their lives prior to the start of the story. This enabled me to start the book in media res (or “in the middle of things”). I didn’t have to warm up to the story drama. I started the drama from the first page.

Q: The novel is set in Charleston, S.C. How important is setting to you in your writing, and why did you decide to include the mass shooting in Charleston as part of the story?

A: Setting the novel in Charleston, South Carolina, was very important to me. There are published romance novels and women’s fiction that are set in the Lowcountry, but they often feature white main characters. 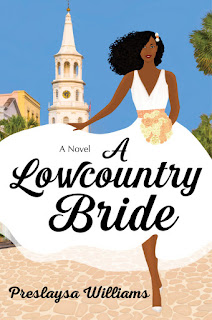 While I was attending back-to-back funerals and wakes for the mass shooting victims, I was also drafting ‪A Lowcountry Bride. I found that I could no longer write the story the way I was writing it. I needed a space to process real life death and grief.

So I put it in the story. Charleston was also the place for a mass shooting in at Emanuel AME Church, one of the oldest Black churches in the nation.

When I lived in Charleston, I attended a different African Methodist Episcopal Church (not Emanuel AME Church). I'm still connected to the church I attended. I visit from time-to-time and I talk to my friends there. They are like family to me.

That's how I ended up making that decision to include a mass shooting in the story. Sometimes the best way for me to deal with harsh events is by putting it in my art.

Q: Another theme in the book is illness, specifically Maya's sickle cell anemia. What role do you see health playing in the novel?

A: I added in Maya’s sickle cell anemia while interviewing her. At the time, I had already written many drafts of the story. When Maya told me that she had sickle cell, I did research on the disease and learned that those who live with it have a shortened life span. That expanded my plot and conflict possibilities for the story.

Q: You're also an actress--how do acting and writing coexist for you?

A: I started acting when I was 9 years old. I was an avid reader as a child, but I didn’t delve into writing fiction until later in life. While I was an undergraduate at Columbia University, I studied under a private acting coach. Her name was Amanda Castle, and she had a studio in downtown New York City where she coached professional actors like myself.

Even though I had been acting for over a decade by the time I started working with my acting coach, she taught me to trust myself and to trust my instincts. She showed me how to use my natural instincts and sense of self-trust to create pure dramatic moments during a scene—moments free of falsehood and artifice.

We spent most of my coaching sessions doing acting exercises where I learned to remove my social mask, the mask that we humans wear to function and survive in the world. Once that social mask was removed, once that barrier was gone, I could express myself as a pure human soul.

Fiction is more fluid and malleable that the social masks we wear, however, because fiction stems from our imagination. I was in my late teens and early 20s at the time, and it was a life changing training for me.

When I became I novelist in my late 20s, those tools were in me and ready to use when needed. However, it’s harder to translate emotion through the written word. It’s much easier to physically act out a character in a scene.

To bridge that gap, I rely on acting techniques like focusing on the character’s objective for a scene and using my own sense memory to pull out the nuances of emotion in a scene while writing.

I also spend a lot of time writing handwritten, stream of consciousness writing – stuff that is just for me and that will never see the light of day. This frees me up in a manner that’s similar to the acting exercises I learned while working with Amanda.

Writers and actors are cousins to one another, and I feel lucky to be trained in both areas.

A: Right now, I am working on another love story set in the Lowcountry. This story is a second chance romance between a different couple. They have unique occupations, and the story references the zeitgeist of our current social climate.

That’s all I’ll say about that for now…

I also have another manuscript on my hard drive. It’s my thesis novel from my MFA program. It’s a dual timeline, women’s fiction. When I have the time, I hope to revise it in the near future.

A: Nothing that I can think of! Thank you so much for taking the time to read A Lowcountry Bride. And thank you for inviting me to your blog!